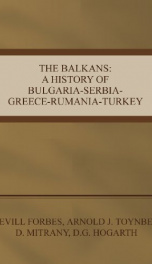 The whole of what may be called the trunk or massif of the Balkan peninsula, bounded on the north by the rivers Save and Danube, on the west by the Adriatic, on the east by the Black Sea, and on the south by a very irregular line running from Antivari (on the coast of the Adriatic) and the lake of Scutari in the west, through lakes Okhrida and Prespa (in Macedonia) to the outskirts of Salonika and thence to Midia on the shores of the Black Sea, following the coast of the Aegean Sea some miles inland, is preponderatingly inhabited by Slavs. These Slavs are the Bulgarians in the east and centre, the Serbs and Croats (or Serbians and Croatians or Serbo-Croats) in the west, and the Slovenes in the extreme north-west, between Trieste and the Save; these nationalities compose the southern branch of the Slavonic race.
Show more
add to favoritesadd In favorites