memoir of the life of josiah quincy jun of massachusetts 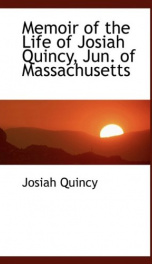 Purchase of this book includes free trial access to www.million-books.com where you can read more than a million books for free. This is an OCR edition with typos. Excerpt from book: This Edmund Quincy left two sons, Edmund and Josiah. Edmund, the eldest, was born in Braintree, in 1703, was educated at Harvard College, and received his degree in 1722. He was many years a merchant in Boston. Afterwards he resided on his paternal estate in Braintree ; was author of " A Treatise on Hemp Husbandry," published in 1765, and died an acting magistrate of the county of Suffolk, in July 1788, at the age of eighty-five. Josiah, the youngest son of Edmund Quincy, was born in Braintree, iu 1709. He was graduated at Harvard College, in 1728, and entered into business as a merchant in Boston. In 1737, he accompanied his father to England, passed several years in Europe at different periods of his life, and finally returned to America in 1749. He was appointed in 1755, by Governor Shirley, joint commissioner with Thomas Pownall, afterwards Governor Pownall, to negotiate with the colonies of Pennsylvania and New York, for assistance in erecting a frontier barrier against the French, at Ticouderoga. In this mission he availed himself of the influence of Dr Franklin, and was successful. The particular circumstances of this negotia- See Appendix. nrc related in the Memoirs of that great man, written by himself. i ....- Josiah Quincy retired in 1756 from business, and resided in Braintree, on his portion of his paternal estate, until his death, in 1784. His latter years were embittered by the loss of his youngest son, the subject of these memoirs, with whose zeal in the cause of American liberty, he cordially co-operated ; and whose reputation for genius, and rising promise of future usefulness and distinction, he had cherished as the hope and solace of his declining years. He was in friendship and correspondence with Washington, Adams, Franklin, Bowdoin, and other d... --This text refers to an alternate Paperback edition.
Show more
add to favoritesadd In favorites

if you like memoir of the life of josiah quincy jun of massachusetts try: 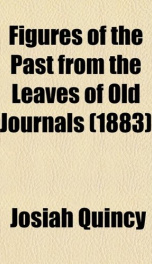 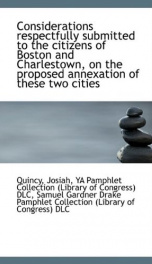 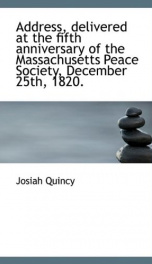 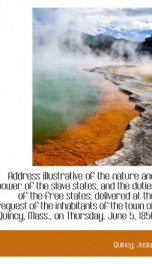 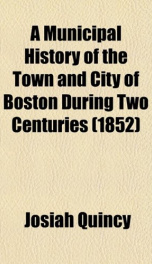 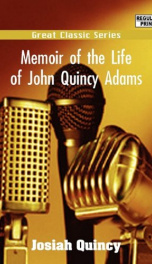 Memoir of the Life of John Quincy Adams. 1/5

if you like memoir of the life of josiah quincy jun of massachusetts try: