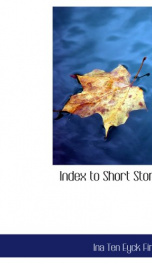 INDEX SHORT STORIES COMPILED BY INA TEN EYCK FIRKINS Reference Librarian, University of Minnesota THE H. W. WILSON COMPANY WHITE PLAINS, N. Y. 1915 Preface The Index to Short Stories is the outgrowth of a large number of scat tered bibliographies of special authors prepared to meet the recurring-needs of students and members of the English Department in the University of Minnesota. Title lists of Kipling, of Stevenson, of Balzac, of F. Hopkinson Smith, and others proved to be so great a convenience to the library assistants as well as to the students, that the preparation of a comprehensive index for general use was the logical result of the work clone in a small way for the benefit of one institution. No claim for completeness in the work is made. To index all short stories would be impossible even were it desirable. American and English authors whose stories have appeared in magazines only have not been in dexed. The work of no American or English writer is included unless he has had published by a reputable publishing house, at least one volume of col lected stories but all the work of the selected authors as far as it has been available, has been indexed. Thus, collected editions, separate volumes, peri odicals, and composite collections of various short stories, have all been consulted for the work of the chosen authors. No effort has been made to recover obscure and fugitive work of the authors indexed that is the work of the bibliophile and special authority, but the best editions of the short story writers have been carefully and generously indexed. To discriminate the short story from longer works of fiction, the arbitrary limit pf two hundred pages as the maximum length was adopted instead of a literary criterion on the basis of structure. This extends into the realm of the novellette, but was deemed expedient on the ground of convenience. A corresponding lapse in literary discrimination is to be found in the inclusion of many short sketches which are not, in the strict sense, stories. In the work of authors such as Nathaniel Hawthorne, Sir James Barrie, and Alphonse Daudet, to mention but three, it is often difficult to tell whether the sketch should be classed as a short story, or as a descriptive narrative. When in doubt, the sketch has been included occasionally, when there has been no doubt, it has been indexed because contained in a volume in which all the other titles were those of stories, and the sketch might therefore be called for in the same connection. Farces, which are in reality short stories in dialogue form, such as those of William Dean Howells, have occasionally been in cluded. Juvenile and fairy stories have been excluded except when they are a minor part of selected authors work and their omission would make the bibliography incomplete. English translations of foreign short stories have been included wherever found. As the work progressed the mass of material became so great that the cost of publication would have been prohibitive had all authors been retained. Therefore, it was necessary to eliminate about three hundred minor authors whose work had been indexed. The selection was made by a referendum sent out to a hundred libraries, requesting them to indicate their preference as to the authors listed. Tt is hoped that the form of entry is self-explanatory 1. The arrangement is alphabetical by author and title, the authors name being 1 printed in bold-faced type. 2. The title entry gives the exact title, followed by the authors name. 3. The author entry gives full information. The titles of the stories under the authors name are alphabetically arranged and each is followed by references given in the following order a. Reference to the complete edition if one has been issued, of the authors works. b. References to the titles of the separate volumes of the authors works in which the story has appeared. c. References to editions of collected stories in which the story has been reprinted... --This text refers to an alternate Paperback edition.
Show more
add to favoritesadd In favorites 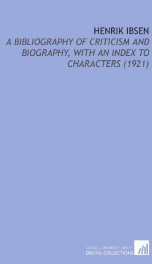