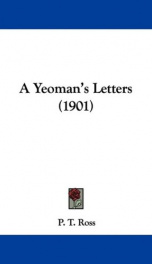 "More khaki," sniffed a bored but charming lady, as she glanced at apicture of the poor Yeomanry at Lindley, and then hastily turned away tosomething of greater interest. I overheard the foregoing at the RoyalAcademy, soon after my return from South Africa, last May, and thankedthe Fates that I was in mufti. It was to a certain extent indicative ofthe jaded interest with which the War is now being followed by a largeproportion of the public at home, the majority of whom, I presume, haveno near or dear ones concerned in the affair; a public which cheereditself hoarse and generally made "a hass" of itself many months ago inwelcoming certain warriors whose period of active service had beensomewhat short. I wonder how the veterans of the Natal campaign, thegallant Irish Brigade, and others, will be received when they return?"Come back from the War! What War?"And yet in spite of this apathy, "War Books" keep appearing, and here isa simple Yeoman thrusting yet another on the British Public. Still'twere worse than folly to apologise, for _qui s'excuse, s'accuse_. --This text refers to the Kindle Edition edition.
Show more
add to favoritesadd In favorites