Under the Rebel's Reign 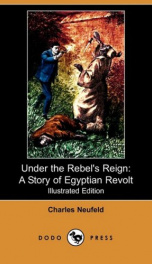 Charles (Karl) Neufeld (1856-1918) was a merchant, born in Prussia. He was captured by the Mahdists in Sudan in 1885 after a failed business venture, and was held captive there for thirteen years. At the Battle of Omdurman, in 1898, General Sir Kitchener defeated the army of Abdullah al-Taashi, the successor to the self-proclaimed Mahdi Muhammad Ahmad, and released Neufeld and thirty other prisoners from heavy chains. He is mentioned in The River War: An Historical Account of the Reconquest of the Soudan (1899) by Winston Churchill, who was present at the battle. Neufeld's works include: The Prisoner of Omdurman (1899), A Prisoner of the Khaleefa: Twelve Years' Captivity at Omdurman (1899) and Under the Rebel's Reign: A Story of Egyptian Revolt (1900).
Show more
add to favoritesadd In favorites