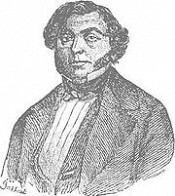 Joseph Marie Eugène Sue (20 January 1804 – 3 August 1857) was a French novelist. He was born in Paris, the son of a distinguished surgeon in Napoleon's army, and is said to have had the Empress Joséphine for godmother. Sue himself acted as surgeon both in the Spanish campaign undertaken by France in 1823 and at the Battle of Navarino (1828). In 1829 his father's death put him in possession of a considerable fortune, and he settled in Paris. A street in Paris is named for Eugene Sue, in the 18th Arrondissement: Rue Eugene Sue is located near the Poissonnière Metro station, and is not far from Montmartre and the Basilica of the Sacré Coeur. His naval experiences supplied much of the materials of his first novels, Kernock le pirate (1830), Atar-Gull (1831), La Salamandre (2 vols., 1832), La Coucaratcha (4 vols., 1832-1834), and others, which were composed at the height of the Romantic movement of 1830. In the quasi-historical style he wrote Jean Cavalier, ou Les Fanatiques des Cevennes (4 vols., 1840) and Lautréaumont (2 vols., 1837). He was strongly affected by the Socialist ideas of the day, and these prompted his most famous works: Les Mystères de Paris (10 vols., 1842-1843) and Le Juif errant (tr. "The Wandering Jew") (10 vols., 1844-1845), which were among the most popular specimens of the roman-feuilleton. He followed these up with some singular and not very edifying books: Les Sept pêchés capitaux (16 vols., 1847-1849), which contained stories to illustrate each of the Seven Deadly Sins, Les Mystères du peuple (1849-1856), which was suppressed by the censor in 1857, and several others, all on a very large scale, though the number of volumes gives an exaggerated idea of their length. Some of his books, among them Le Juif Errant and the Mystères de Paris, were dramatized by himself, usually in collaboration with others. His period of greatest success and popularity coincided with that of Alexandre Dumas, père, with whom he has been compared. Sue has neither Dumas's wide range of subject, nor, above all, his faculty of conducting the story by means of lively dialogue; he has, however, a command of terror which Dumas seldom or never attained. After the revolution of 1848 he sat for Paris (the Seine) in the Assembly from April 1850, and was exiled in consequence of his protest against the coup d'état of 2 December 1851. This exile stimulated his literary production, but the works of his last days are on the whole much inferior to those of his middle period. Sue died at Annecy (Savoy) in 1857. Seven years after the publication of Sue's Les Mystères du peuple, a French revolutionary named Maurice Joly plagiarized aspects of the work for his anti-Napoleon III pamphlet, Dialogues in Hell between Machiavelli and Montesquieu, which in turn was later adapted by the Prussian Hermann Goedsche into an 1868 work entitled Biarritz, in which Goedsche substituted Jews for Sue's infernal Jesuit conspirators. Ultimately, this material became incorporated directly into the notorious anti-Semitic hoax, The Protocols of the Elders of Zion.
Show more
add to favoritesadd In favorites

The Galley Slave's Ringor The Family of Lebrenn. A Tale of The French Revolution of 1848 Series: Unknown Year: Unknown Raiting: 4.5/5 Show more
add to favoritesadd In favorites

The Sword of Honor,volumes 1 & 2or The Foundation of the French Republic,A Tale of TheFrench Revolution Series: Unknown Year: Unknown Raiting: 5/5 Show more
add to favoritesadd In favorites

The Iron Trevet or Jocelyn the ChampionA Tale of the Jacquerie Series: Unknown Year: Unknown Raiting: 4/5 Show more
add to favoritesadd In favorites