Morgan Robertson (September 30, 1861–March 24, 1915) was a well-known American author of short stories and novels, and the possible inventor of the periscope. Nowadays he is best known for the short novel Futility, first published in 1898. This story features an enormous British passenger liner called the Titan, which, deemed to be unsinkable, carries insufficient lifeboats. On a voyage in the month of April, the Titan hits an iceberg and sinks in the North Atlantic with the loss of almost everyone on board. The similarities between the fictional sinking of the Titan and the real-life sinking of the RMS Titanic in 1912 attract attention even today although there are significant differences: for example, the fictional Titan capsized and sank almost immediately (rendering the number of lifeboats moot), and the Titan was on its third return trip from New York, not her maiden voyage to New York. In 1905, Robertson's book The Submarine Destroyer was released. It described a submarine that used a device called a periscope. Despite Robertson's later claims that he had "invented" a prototype periscope himself (and was refused a patent), Lake and Grubbs had perfected the model used by the U.S. Navy by 1902, 3 years before Robertson's "prescient" novel. In 1914 (in a volume that also contained the new version of Futility), Robertson included a short story called Beyond the Spectrum, which described a future war between the United States and Japan, a popular subject at the time. Like The Wreck of the Titan, Beyond the Spectrum bore some similarities with actual events. Japan does not declare war but instead launches sneak attacks on United States ships en route to the Philippines and Hawaii; an invasion fleet about to conduct a surprise attack on San Francisco is stopped by the hero using the weapon from a captured Japanese vessel. The title refers to an ultraviolet searchlight used by the Japanese (but invented by the Americans) to blind American crews. Some readers have compared the searchlight's effects (blindness, intense heat, and facial burns) to those of the atomic bomb. Robertson was the author of Primordial / Three Laws and the Golden Rule, a novella about shipwrecked children growing up together and falling in love on a desert island. Fans of Edgar Rice Burroughs acknowledge Robertson's contribution to the works of Henry De Vere Stacpoole, particularly The Blue Lagoon. They believe that both Robertson's and Stacpoole's writings influenced Burroughs in his creation of Tarzan of the Apes.[1] On March 24, 1915, Robertson was found dead in his room at the Alamac Hotel in Atlantic City, New Jersey. He was 53 years of age. It is believed that he died of an overdose of protiodide. This list is not necessarily complete
Show more
add to favoritesadd In favorites

"Where Angels Fear to Tread" and Other Stories of the Sea Series: Unknown Year: Unknown Raiting: 3.5/5 Show more
add to favoritesadd In favorites

"Where Angels Fear to Tread" and Other Stories of the Sea Series: Unknown Year: Unknown Raiting: 3.5/5 Show more
add to favoritesadd In favorites 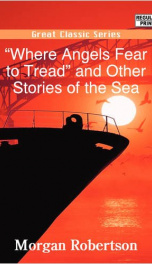 "Where Angels Fear to Tread" and Other Stories of the Sea Series: Unknown Year: Unknown Raiting: 2.5/5 Product DescriptionAn Excerpt from the book-The first man to climb the _Almena's_ side-ladder from the tug was theshipping-master, and after him came the crew he had shipped. Theyclustered at the rail, looking around and aloft with muttered profanecomments, one to the other, while the shipping-master approached agray-eyed giant who stood with a shorter but broader man at thepoop-deck steps."Mr. Jackson--the mate here, I s'pose?" inquired the shipping-master. Anod answered him. "I've brought you a good crew," he continued; "we'lljust tally 'em off, and then you can sign my receipt. The captain'll bedown with the pilot this afternoon.""I'm the mate--yes," said the giant; "but what dry-goods store did youraid for that crowd? Did the captain pick 'em out?""A delegation o' parsons," muttered the short, broad man,contemptuously."No, they're not parsons," said the shipping-master, as he turned tothe man, the slightest trace of a smile on his seamy face. "You're Mr.Becker, the second mate, I take it; you'll find 'em all right, sir.They're sailors, and good ones, too. No, Mr. Jackson, the skipperdidn't pick 'em--just asked me for sixteen good men, and there you are.Muster up to the capstan here, boys," he called, "and be counted."As they grouped themselves amidships with their clothes-bags, theshipping-master beckoned the chief mate over to the rail."You see, Mr. Jackson," he said, with a backward glance at the men,"I've only played the regular dodge on 'em. They've all got thesailor's bug in their heads and want to go coasting; so I told 'em thiswas a coaster." --This text refers to the Kindle Edition edition. Show more
add to favoritesadd In favorites 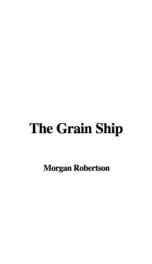 The Grain Ship Series: Unknown Year: Unknown Raiting: 2.5/5 Morgan Robertson (1861-1915) is known as an American novelist and a master of short stories. The Grain Ship is an amazing collection of his fictional short stories that includes such stories as From the Darkness and the Depths, Noah's Ark, The Finishing Tower, The Rock, The Argonauts. The Married Man, The Triple Alliance, Shovels and Bricks and Extracts From Noah's Log. Show more
add to favoritesadd In favorites