Sir Max Pemberton (June 19, 1863 – February 22, 1950) was a popular British novelist, working mainly in the adventure and mystery genres. He was educated at St Albans School, Merchant Taylors' School, and Caius College, Cambridge.[1] A clubman, journalist and dandy (Lord Northcliffe admired his 'fancy vests'), he frequented both Fleet Street and The Savage Club. Pemberton was the editor of boys' magazine Chums during its heyday. Between 1896 and 1906 he also edited Cassell's Magazine (see [1]), in which capacity he published the early works of Austin Freeman, William Le Queux and Bertram Fletcher Robinson. His most famous work The Iron Pirate was a bestseller during the early 1890s and it launched his prolific writing career (see below). It was the story of a great gas-driven iron-clad, which could outpace the navies of the world and terrorized the Atlantic Ocean. Other notable works included The Wheels of Anarchy (1908) and Captain Black (1911). In 1920, Pemberton founded the London School of Journalism, wrote a biography about Alfred Harmsworth, 1st Viscount Northcliffe and was knighted.
Show more
add to favoritesadd In favorites

The House Under the Sea A Romance Series: Unknown Year: Unknown Raiting: 4/5 Show more
add to favoritesadd In favorites

The Man Who Drove the Car Series: Unknown Year: Unknown Raiting: 5/5 This book was converted from its physical edition to the digital format by a community of volunteers. You may find it for free on the web. Purchase of the Kindle edition includes wireless delivery. Show more
add to favoritesadd In favorites 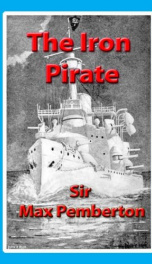 The Iron Pirate Series: Unknown Year: Unknown Raiting: 2.5/5 From Content: "If it has not been your privilege to hear a French guard utter these words, you have lost a lesson in the dignity of elocution which nothing can replace. "En voiture, en voiture; five minutes for Paris." At the well-delivered warning, the Englishman in the adjoining buffet raises on high the frothing tankard, and vaunts before the world his capacity for deep draughts and long; the fair American spills her coffee and looks an exclamation; the Bishop pays for his daughter's tea, drops the change in the one chink which the buffet boards disclose, and thinks one; the travelled person, disdaining haste, smiles on all with a pitying leer; the foolish man, who has forgotten something, makes public his conviction that he will lose his train. The adamantine official alone is at his ease, and, as the minutes go, the knell of the train-loser sounds the deeper, the horrid jargon is yet more irritating. I thought all these things, and more, as I waited for the Perfect Fool at the door of my carriage in the harbour station at Calais. He was truly an impossible man, that small-eyed, short-haired, stooping mystery I had met at Cowes a month before, and formed so strange a friendship with. To-day he would do this, to-morrow he would not; to-day he had a theory that the world was egg-shaped, to-morrow he believed it to be round; in one moment he was hot upon a journey to St. Petersburg, in the next he felt that the Pacific Islands offered a better opportunity. If he had a second coat, no man had ever seen it; if he had a purpose in life, no man, I hold, had ever known it. And yet there was a fascination about him you could not resist; in his visible, palpitating, stultifying folly there was something so amazing that you drew to the man as to that unknown something which the world had not yet given to you, as a treasure to be worn daily in the privacy of your own enjoyment. I had, as I have said, picked the Perfect Fool up at Cowes, whither I had taken my yacht, Celsis, for the Regatta Week; and he had clung to me ever since with a dogged obstinacy that was a triumph. He had taken of my bread and eaten of my salt unasked; he was not a man such as the men I knew-he was interested in nothing, not even in himself-and yet I tolerated him. And in return for this toleration he was about to make me lose a train for Paris. "Will you come on?" I roared for the tenth time, as the cracked bell jangled and the guards hoisted the last stout person into the only carriage where there was not a seat for her. "Don't you see we shall be left behind? Hurry up! Hang your parcels! Now then-for the last time, Hall, Hill, Hull, whatever your confounded name is, are you coming?" Many guards gave a hand to the hoist, and the Perfect Fool fell upon his hat-box, which was all the personal property he seemed to possess. He apologised to Mary, who sat in the far corner, with more grace than I had looked for from him, woke Roderick, who was in his fifth sleep since luncheon, and then gathered the remnants of himself into a coherent whole. "Did anyone use my name?" he asked gravely, and as one offended. "I thought I heard someone call me Hull?" "Exactly; I think I called you every name in the Directory, but I'm glad you answer to one of them." "Yes, and I tell you what," said Roderick, "I wish you wouldn't come into a railway carriage on your hands and knees, waking a fellow up every time he tries to get a minute to himself; I don't speak for myself, but for my sister." The Perfect and he said, "I cannot make your sister an apology worthy of her." "If that isn't a shame, Mr. Hall," replied the blushing girl. "I never go to sleep in railway carriages." Show more
add to favoritesadd In favorites

The House Under the Sea Series: Unknown Year: Unknown Raiting: 4/5 From Content: "Many gentlemen have asked me to write the story of Ken's Island, and in so far as my ability goes, that I will now do. A plain seaman by profession, one who has had no more education than a Kentish grammar school can give him, I, Jasper Begg, find it very hard to bring to other people's eyes the wonderful things I have seen or to make all this great matter clear as it should be clear for a right understanding. But what I know of it, I will here set down; and I do not doubt that the newspapers and the writers will do the rest. Now, it was upon the third day of May in the year 1899, at four bells in the first dog watch, that Harry Doe, our boatswain, first sighted land upon our port-bow, and so made known to me that our voyage was done. We were fifty-three days out from Southampton then; and for fifty-three days not a man among the crew of the Southern Cross had known our proper destination, or why his skipper, Jasper Begg, had shipped him to sail for the Pacific Ocean. A pleasure voyage, the papers said; and some remembered that I had been in and out of private yachts ever since I ran away from school and booked with Skipper Higg, who sailed Lord Kanton's schooner from the Solent; but others asked themselves what pleasure took a yacht's skipper beyond the Suez, and how it came about that a poor man like Jasper Begg found the money to commission a 500-ton tramp through Philips, Westbury, and Co., and to deal liberally with any shipmate who had a fancy for the trip. These questions I meant to answer in my own time. A hint here and there of a lady in whose interest the voyage was undertaken kept the crew quiet, if it did not please its curiosity. Mister Jacob, my first officer, and Peter Bligh (who came to me because he said I was the only man who kept him away from the drink) guessed something if they knew little. They had both served under me in Ruth Bellenden's yacht; neither had forgotten that Ruth Bellenden's husband sailed eastward for the wedding trip. If they put their heads together and said that Ruth Bellenden's affairs and the steam-ship Southern Cross were not to be far apart at the end of it, I don't blame them. It was my business to hold my tongue until the land was sighted, and so much I did for Ruth Bellenden's sake. Well, it was the third day of May, at four bells in the first dog watch, when Harry Doe, the boatswain, sighted land on the port-bow, and came abaft with the other hands to hear what I had got to say to him. Mr. Jacob was in his bunk then, he being about to take the first watch, and Peter Bligh, who walked the bridge, had rung down for half-speed by the time I came out with my glass for the first view of the distant island. We were then, I must tell you at a rough reckoning, in longitude 150 east of Greenwich, by about 30 north; and my first thought was that we might have sighted the Ganges group, as many a ship sailing from 'Frisco to Japan; but when I had looked at the land a little while, and especially at a low spur of rocks to the northward, I knew that this was truly the Ken Archipelago, and that our voyage was done." Show more
add to favoritesadd In favorites