James Parton (February 9, 1822 – October 17, 1891) was an England-born American biographer. Parton was born in Canterbury, England in 1822. He was taken to the United States when he was five years old, studied in New York City and White Plains, New York, and was a schoolmaster in Philadelphia and then in New York. He moved to Newburyport, Massachusetts, where he died on October 17, 1891. Parton was the most popular biographer of his day in America. His most important books are Life of Horace Greeley (1855), Life and Times of Aaron Burr (1857), Life of Andrew Jackson (1859–1860), Life and Times of Benjamin Franklin (1864), Life of Thomas Jefferson (1874), and Life of Voltaire (1881). Among his other publications are General Butler in New Orleans (1863), Famous Americans of Recent Times (1867), The Peoples Book of Biography (1868); Noted Women of Europe and America (1883), and Captains of Industry (two series, 1884 and 1891), for young people. His first wife, Sara (1811–1872), sister of Nathaniel Parker Willis, and widow of Charles H. Eldredge (d. 1846), attained considerable popularity as a writer under the pen-name Fanny Fern. They were married in 1856. Her works include the novels, Ruth Hall (1854), reminiscent of her own life, and Rose Clark (1857); and several volumes of sketches and stories. In 1876 Parton married Ellen Willis Eldredge, his first wife's daughter by her first husband, Charles Eldredge. His adopted daughter, Ethel, the daughter of Grace Eldrege (Fanny Fern's daughter) and writer Mortimer Thomson (also known as Philander Doesticks), was adopted by Parton in 1872, and she later adopted Parton's last name. Ethel Parton became a famous writer of children's books about 19th century life in Newburyport, MA, published in the 1930s and 1940s. James and Ellen had two children, Hugo and Mabel. Hugo's children (James Parton's actual grandchildren) were James Parton and Niké (pronounced Ni-KAY, not like the shoes) Parton. James Parton(1912-2001) was founder and publisher of American Heritage and Horizon Magazines. Niké Parton (1922-2005) was a prominent Florida artist. This article incorporates text from the Encyclopædia Britannica, Eleventh Edition, a publication now in the public domain.
Show more
add to favoritesadd In favorites

Caricature and Other Comic Artin all Times and many Lands. Series: Unknown Year: Unknown Raiting: 3/5 Show more
add to favoritesadd In favorites

Captains of Industryor,Men of Business Who Did Something Besides Making Money Series: Unknown Year: Unknown Raiting: 3.5/5 Show more
add to favoritesadd In favorites 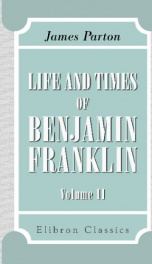 Caricature and Other Comic Artin all Times and many Lands. Series: Unknown Year: Unknown Raiting: 3/5 Show more
add to favoritesadd In favorites

Captains of Industryor,Men of Business Who Did Something Besides Making Money Series: Unknown Year: Unknown Raiting: 3.5/5 Show more
add to favoritesadd In favorites 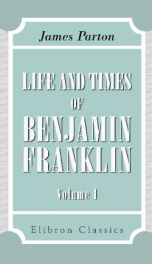 illustrious men and their achievements or the peoples book of biography Series: Unknown Year: Unknown Raiting: 3/5 Show more
add to favoritesadd In favorites 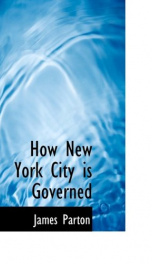 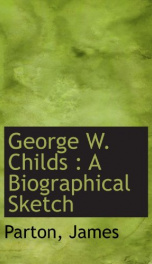 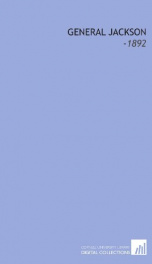 general jackson Series: Unknown Year: Unknown Raiting: 3.5/5 Originally published in 1892. This volume from the Cornell University Library's print collections was scanned on an APT BookScan and converted to JPG 2000 format by Kirtas Technologies. All titles scanned cover to cover and pages may include marks notations and other marginalia present in the original volume. Show more
add to favoritesadd In favorites 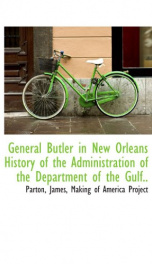 general butler in new orleans history of the administration of the department of Series: Unknown Year: Unknown Raiting: 2.5/5 This volume is produced from digital images created through the University of Michigan University Library’s preservation reformatting program. Show more
add to favoritesadd In favorites 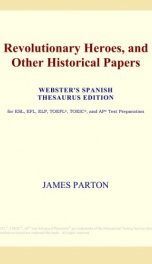 Revolutionary Heroes, and Other Historical Papers Series: Unknown Year: Unknown Raiting: 3.5/5 Webster's edition of this classic is organized to expose the reader to a maximum number of synonyms and antonyms for difficult and often ambiguous English words that are encountered in other works of literature, conversation, or academic examinations. Extremely rare or idiosyncratic words and expressions are given lower priority in the notes compared to words which are ¿difficult, and often encountered¿ in examinations. Rather than supply a single synonym, many are provided for a variety of meanings, allowing readers to better grasp the ambiguity of the English language, and avoid using the notes as a pure crutch. Having the reader decipher a word's meaning within context serves to improve vocabulary retention and understanding. Each page covers words not already highlighted on previous pages. If a difficult word is not noted on a page, chances are that it has been highlighted on a previous page. A more complete thesaurus is supplied at the end of the book; synonyms and antonyms are extracted from Webster's Online Dictionary. PSAT¿ is a registered trademark of the College Entrance Examination Board and the National Merit Scholarship Corporation neither of which sponsors or endorses this book; SAT¿ is a registered trademark of the College Board which neither sponsors nor endorses this book; GRE¿, AP¿ and Advanced Placement¿ are registered trademarks of the Educational Testing Service which neither sponsors nor endorses this book, GMAT¿ is a registered trademark of the Graduate Management Admissions Council which is neither affiliated with this book nor endorses this book, LSAT¿ is a registered trademark of the Law School Admissions Council which neither sponsors nor endorses this product. All rights reserved. Show more
add to favoritesadd In favorites

The Humorous Poetry of the English Language; from Chaucer to Saxe Series: Unknown Year: Unknown Raiting: 3.5/5 This volume is produced from digital images created through the University of Michigan University Library’s preservation reformatting program. Show more
add to favoritesadd In favorites 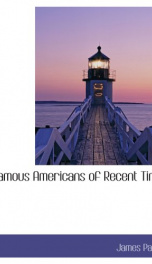 Famous Americans of Recent Times Series: Unknown Year: Unknown Raiting: 0.5/5 Purchase of this book includes free trial access to www.million-books.com where you can read more than a million books for free. This is an OCR edition with typos. Excerpt from book: in America had become necessaries of life, he was quick to perceive what an advantage he would have over other merchants by sending his ships to Canton provided with furs as well as dollars. It was about the year 1800 that he sent his first ship to Canton, and he continued to carry on commerce with China for twenty-seven years, sometimes with loss, generally with profit, and occasionally with splendid and bewildering success. It was not, however, until the year 1800, when he was worth a quarter of a million dollars, and had been in business fifteen years, that he indulged himself in the comfort of living in a house apart from his business. In 1794 he appears in the Directory as " Furrier, 149 Broadway." From 1796 to 1799 he figures as " Fur Merchant, 149 Broadway." In 1800 he had a storehouse at 141 Greenwich Street, and lived at 223 Broadway, on the site of the present Astor House. In 1801, his store was at 71 Liberty Street, and he had removed his residence back to 149 Broadway. The year following we find him again at 223 Broadway, where he continued to reside for a quarter of a century. His house was such as a fifth-rate merchant would now consider much beneath his dignity. Mr. Astor, indeed, had a singular dislike to living in a large house. He had neither expensive tastes nor wasteful vices. His luxuries were a pipe, a glass of beer, a game of draughts, a ride on horseback, and the theatre. Of the theatre he was particularly fond. He seldom missed a good performance in the palmy days of the " Old Park." It was his instinctive abhorrence of ostentation and waste that enabled him, as it were, to glide into the millionnaire without being observed by his neighbors. He used to relate, with a chuckle, that he was worth a million before any one suspected it. A dandy bank-clerk... --This text refers to an alternate Paperback edition. Show more
add to favoritesadd In favorites