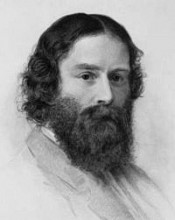 The Vision of Sir Launfal And Other Poems by James Russell Lowell; Edited with an Introduction and Notes by Julian W. Abernethy,Ph.D. Series: Unknown Year: Unknown Raiting: 3.5/5 Show more
add to favoritesadd In favorites

The Vision of Sir Launfal And Other Poems by James Russell Lowell; Edited with an Introduction and Notes by Julian W. Abernethy,Ph.D. Series: Unknown Year: Unknown Raiting: 3.5/5 Show more
add to favoritesadd In favorites

The Vision of Sir Launfal And Other Poems by James Russell Lowell; With a Biographical Sketch and Notes,a Portrait and Other Illustrations Series: Unknown Year: Unknown Raiting: 5/5 Show more
add to favoritesadd In favorites 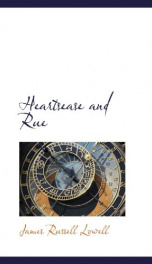 heartsease and rue Series: Unknown Year: Unknown Raiting: 3.5/5 Purchase of this book includes free trial access to www.million-books.com where you can read more than a million books for free. This is an OCR edition with typos. Excerpt from book: TO C. F. BRADFORD ON THE GIFT OF A MEEKSCHAUM PIPE. [the pipe came safe, and welcome too, As anything must be from you; A meerschaum pure, 't would float as light As she the girls call Amphitrite. Mixture divine of foam and clay, From both it stole the best away : Its foam is such as crowns the glow Of beakers brimmed by Veuve Clicquot; Its clay is but congested lymph Jove chose to make some choicer nymph; And here combined,  why, this must be The birth of some enchanted sea, Shaped to immortal form, the type And very Venus of a pipe. When high I heap it with the weed From Lethe wharf, whose potent seed Nicotia, big from Bacchus, bore And cast upon Virginia's shore, I 'l1 think,  So fill the fairer bowl And wise alembic of thy soul, With herbs far-sought that shall distil, Not fumes to slacken thought and will, But bracing essences that nerve To wait, to dare, to strive, to serve. When curls the smoke in eddies soft, And hangs a shifting dream aloft, That gives and takes, though chance-designed, The impress of the dreamer's mind, I 'll think,  So let the vapors bred By Passion, in the heart or head, Pass off and upward into space, Waving farewells of tenderest grace, Remembered in some happier time, To blend their beauty with my rhyme. While slowly o'er its candid bowl The color deepens (as the soul That burns in mortals leaves its trace Of bale or beauty on the face), I 'll think,  So let the essence rare Of years consuming make me fair ; So, 'gainst the ills of life profuse, Steep me in some narcotic juice ; And if my soul must part with all That whiteness which we greenness call, Smooth back, O Fortune, half thy frown, And make me beautifully brown ! Dream-forger, I refill thy cup With reverie's wasteful pittance up, tO C.... --This text refers to an alternate Paperback edition. Show more
add to favoritesadd In favorites

early prose writings of james russell lowell Series: Unknown Year: Unknown Raiting: 2.5/5 This volume is produced from digital images created through the University of Michigan University Library's large-scale digitization efforts. The Library seeks to preserve the intellectual content of items in a manner that facilitates and promotes a variety of uses. The digital reformatting process results in an electronic version of the original text that can be both accessed online and used to create new print copies. The Library also understands and values the usefulness of print and makes reprints available to the public whenever possible. This book and hundreds of thousands of others can be found in the HathiTrust, an archive of the digitized collections of many great research libraries. For access to the University of Michigan Library's digital collections, please see http://www.lib.umich.edu and for information about the HathiTrust, please visit http://www.hathitrust.org Show more
add to favoritesadd In favorites 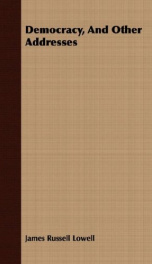 democracy and other addresses Series: Unknown Year: Unknown Raiting: 3.5/5 MY DEAR SMAIY, -YOU heard several of these Addresses delivered, and were good enough to think better of them than I did. As this was one of my encouragements to repeat them before a larger audience, perhaps you will accept the dedication of the volume wh Show more
add to favoritesadd In favorites 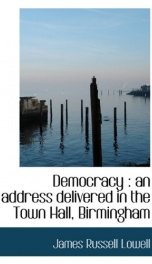 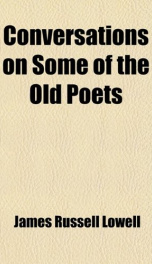 conversations on some of the old poets Series: Unknown Year: Unknown Raiting: 4/5 Purchase of this book includes free trial access to www.million-books.com where you can read more than a million books for free. This is an OCR edition with typos. Excerpt from book: THIRD CONVERSATION. THE OLD DRAMATISTS. JOHN. I Believe it was Dr. Johnson (surely, it was no poet) who first said that all good poetry could be translated into as good prose. It is plain that he saw no distinction between the two, except in the metre and rhyme. I should judge so, at least, from his own verses. PHILIP. He meant that all poetry must be translatable into " common sense," that popular altar upon whose horns dulness and prejudice are so ready to cling. But how is Pegasus better than a dray-horse, with this market- cart trundling behind him? Doubtless, some of the truest poetry has been written without either rhyme or metre; but it has lacked one of its highest adornments, and one which the most poetical thoughts demand. Metre and rhyme are wings to the artist, and crutches to the artificer; they may lift the one to a more empyreal vantage-ground, but they will only change the natural gait of the other for a hobble. The grandest and most noble part of poetry is independent of them. Yet, wanting these, a poem shall want thecompleteness of its effect. I believe both of them to be the instinctive desires of the most amply poetical spirits. I could cite many poems which would be nothing without them, yet which have the blessed power to lead my heart into the cool stillness of memory, or to the breezy headlands of hope. John. Prose may do the same. PHILIP. Ay, but not so cheaply and simply. It is a great gift to be able to conceive and express those thoughts which entice us out of the actual into the ideal; a yet greater one, to utter such as teach us to unite the two; but, surely, that is the greatest gift of all which super- adds to these a keener and more refined delight. There are moods, too, in which pleasurable emotion is all that the mind is c... Show more
add to favoritesadd In favorites

a fable for critics or better a glance at a few of our literary progenies fro Series: Unknown Year: Unknown Raiting: 4.5/5 Show more
add to favoritesadd In favorites 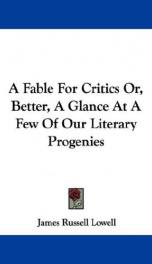 a fable for critics or better a glance at a few of our literary progenies Series: Unknown Year: Unknown Raiting: 4/5 The Entire Title: Reader! Walk Up At Once (It Will Soon Be Too Late) And Buy At A Perfectly Ruinous Rate A Fable For Critics; Or Better (I Like, As A Thing That The Reader's First Fancy May Strike, An Old Fashioned Title Page Such As Presents A Tabular View Of The Volume's Contents) A Glance At A Few Of Our Literary Progenies From The Tub Of Diogenes; A Vocal And Musical Medley. That Is, A Series Of Jokes By A Wonderful Quiz, Who Accompanies Himself With A Rub-A-Dub-Dub, Full Of Spirit And Grace, On The Top Of The Tub. This scarce antiquarian book is included in our special Legacy Reprint Series. In the interest of creating a more extensive selection of rare historical book reprints, we have chosen to reproduce this title even though it may possibly have occasional imperfections such as missing and blurred pages, missing text, poor pictures, markings, dark backgrounds and other reproduction issues beyond our control. Because this work is culturally important, we have made it available as a part of our commitment to protecting, preserving and promoting the world's literature. Show more
add to favoritesadd In favorites