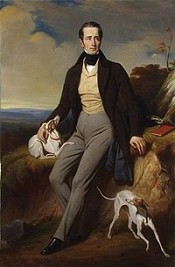 Alphonse Marie Louis de Prat de Lamartine (21 October 1790 - 28 February 1869) was a French writer, poet and politician. Born in Mâcon, Burgundy into French provincial nobility, he spent his youth at the family property at Milly-Lamartine. He is famous for his partly autobiographical poem, "Le Lac" ("The Lake"), which describes in retrospect the fervent love shared by a couple from the point of view of the bereaved man. Lamartine was masterly in his use of French poetic forms. He was one of very few French literary figures to combine his writing with a political career. Raised a devout Catholic, Lamartine became a pantheist, writing Jocelyn and La Chute d'un ange. He wrote Histoire des Girondins in 1847 in praise of the Girondists. He worked for the French embassy in Italy from 1825 to 1828. In 1829, he was elected a member of the Académie française. He was elected a 'député' in 1833, and was briefly in charge of government during the turbulence of 1848. He was Minister of Foreign Affairs from 24 February 1848 to 11 May 1848. Due to his great age, Jacques-Charles Dupont de l'Eure, Chairman of the Provisional Government, effectively delegated much of his duties to Lamartine. He was then a member of the Executive Commission, the political body which served as France's joint Head of State. During his term as a politician in the Second Republic of France, he led efforts that eventually led to the abolition of slavery and the death penalty, as well as the enshrinement of the right to work and the short-lived national workshop programs. A political idealist who supported democracy and pacifism, his moderate stance on most issues caused his followers to desert him. He was an unsuccessful candidate to the presidential election of 10 December 1848. He subsequently retired from politics and dedicated himself to literature. He ended his life in poverty, publishing monthly installments of the Cours familier de littérature to support himself. He died in Paris. He is considered to be the first French romantic poet (though Charles-Julien Lioult de Chênedollé was working on similar innovations at the same time), and was acknowledged by Paul Verlaine and the Symbolists as an important influence. Alphonse de Lamartine as quoted in Histoire de la Turquie (1854) speaks on Mohammad: "Never has a man proposed for himself, voluntarily or involuntarily, a goal more sublime, since this goal was beyond measure: undermine the superstitions placed between the creature and the Creator, give back God to man and man to God, reinstate the rational and saintly idea of divinity in the midst of this prevailing chaos of material and disfigured gods of idolatry. Never has a man accomplished in such a short time such an immense and long lasting revolution in the world, since less than two centuries after his predication, Islam, preaching and armed, ruled over three Arabias, and conquered to God’s unity Persia, the Khorasan, Transoxania, Western India, Syria, Egypt, Ethiopia, and all the known continent of Southern Africa, many islands of the Mediterranean, Spain and part of Gaulle. If the grandeur of the aim, the smallness of the means, the immensity of the result are the three measures of a man’s genius, who would dare humanly compare a great man of modern history with Mohammad? The most famous have only moved weapons, laws, empires; they founded, when they founded anything, only material powers, often crumbling before them. This one not only moved armies, legislations, empires, peoples, dynasties, millions of men over a third of the inhabited globe; but he also moved ideas, beliefs, souls. He founded upon a book, of which each letter has become a law, a spiritual nationality embracing people of all languages and races; and made an indelible imprint upon this Muslim world, for the hatred of false gods and the passion for the God, One and Immaterial. Philosopher, orator, apostle, legislator, warrior conqueror of ideas, restorer of a rational dogma for a cult without imagery, founder of twenty earthly empires and of a spiritual empire, this is Mohammad. Of all the scales by which one measures human grandeur, which man has been greater..."
Show more
add to favoritesadd In favorites

History of the Girondists,Volume IPersonal Memoirs of the Patriots of the French Revolution Series: Unknown Year: Unknown Raiting: 5/5 Show more
add to favoritesadd In favorites

RaphaelPages of the Book of Life at Twenty Series: Unknown Year: Unknown Raiting: 3/5 Show more
add to favoritesadd In favorites 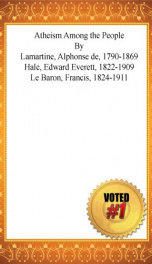 Atheism Among the People Series: Unknown Year: Unknown Raiting: 1/5 This book was converted from its physical edition to the digital format by a community of volunteers. You may find it for free on the web. Purchase of the Kindle edition includes wireless delivery. Show more
add to favoritesadd In favorites