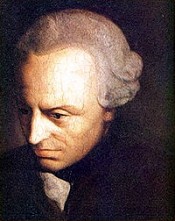 On the Popular Judgment: That may be Right in Theory,but does not Hold Good in the Praxis Series: Unknown Year: Unknown Raiting: 3.5/5 Show more
add to favoritesadd In favorites 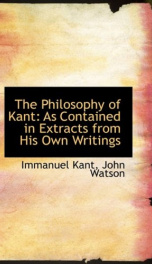 the philosophy of kant as contained in extracts from his own writings Series: Unknown Year: Unknown Raiting: 3/5 Selections from among Immanuel Kant's work including The Critique of Pure Reason, [Fundamentals to the] Metaphysic of Morality, Critique of Practical Reason, and Critique of Judgment. Pages: x+356; 7.62" x 4.75" Deep red cloth covers, 8vo: all pages cut Show more
add to favoritesadd In favorites 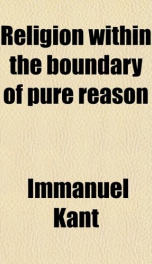 religion within the boundary of pure reason Series: Unknown Year: Unknown Raiting: 4/5 Purchase of this book includes free trial access to www.million-books.com where you can read more than a million books for free. This is an OCR edition with typos. Excerpt from book: PREFACE TO THE SECOND EDITION. In this edition no alterations have been made; only the misprints, and some few faulty expressions, have been amended. One or two additional notes have been subjoined to the text. They are indicated by a star, thus. Those in the old edition bore a cross f. Touching the title of the book (religion Within The Bounds Of Naked Reason, for it seems I have been accused of some latent design), I beg leave to say in explanation, that since a Revelation may comprehend inter alia as its object-matter the doctrines of Natural ReliGion, while, conversely, this last cannot possibly contain the historical details of the former, it may be permitted ug to regard the one as a larger sphere of belief, containing within it the other as a less (i. e. as orbs concentric, consequently not without and outside of one another). Within the bounds of this lastthe smaller spheremay the philosopher, as an inquirer into pure reason, proceeding singly upon principles a priori, confine himself; where, consequently, he must abstract from all experience and observation. Leaving this position, he may make thefarther experiment of beginning at any supposed revelation (abstracting in the meanwhile from pure natural Religion, as an independent and self-subsisting system), and of holding it, as a historical system, bit by bit, up to the moral notions, for the purpose of comparison ; in order to see if it do not lead back eventually to the self-same system of Natural Theology, which, though incomplete in itself in a theoretical point of view (for it would require to embrace and contain a tcchnico-practical part, for the purpose of instruction), is, nevertheless, for every ethico- practical purpose, complete, and quite sufficient for religion properly so called; which, as a notio... Show more
add to favoritesadd In favorites 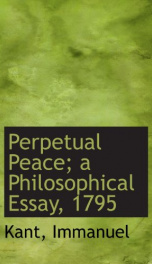 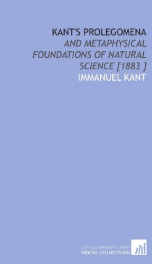 kants prolegomena and metaphysical foundations of natural science Series: Unknown Year: Unknown Raiting: 3.5/5 Originally published in 1883. This volume from the Cornell University Library's print collections was scanned on an APT BookScan and converted to JPG 2000 format by Kirtas Technologies. All titles scanned cover to cover and pages may include marks notations and other marginalia present in the original volume. Show more
add to favoritesadd In favorites

kants cosmogony microform as in his essay on the retardation of the rotatio Series: Unknown Year: Unknown Raiting: 4.5/5 Show more
add to favoritesadd In favorites 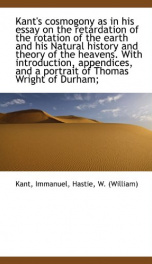 kants cosmogony as in his essay on the retardation of the rotation of the earth Series: Unknown Year: Unknown Raiting: 3/5 "Those Ýlibraries without Ýthe old edition should have this edition in their collection of Kant's works in translation, since no other is in print in English."-Choice --This text refers to an out of print or unavailable edition of this title. Show more
add to favoritesadd In favorites 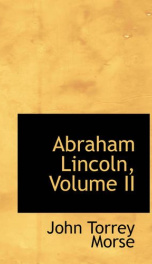 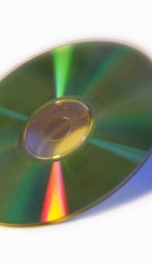