The Story of My Heart An Autobiography Series: Unknown Year: Unknown Raiting: 4.5/5 Show more
add to favoritesadd In favorites

restless human hearts a novel Series: Unknown Year: Unknown Raiting: 4/5 John Richard Jefferies (1848-1887) was an English nature writer, essayist and journalist. He wrote fiction mainly based on farming and rural life. From early in life he showed a great love of the countryside, but was temperamentally unsuited to follow his father as a farmer, and in 1866 he found employment as a newspaper reporter for the North Wiltshire Herald and the Swindon Advertiser. In late 1877 he moved to Surbiton to be nearer the hub of literary England. His new surroundings defined him, as a country writer. Articles drawing on Jefferies' Wiltshire experiences were snapped up by the Pall Mall Gazette, then published in book form as The Gamekeeper at Home in 1878, to be followed by similar collections of essays, like Round About a Great Estate (1880). About this time he wrote his extraordinary autobiography, The Story of My Heart: An Autobiography (1883). Other works include: The Amateur Poacher (1879), Hodge and His Masters (1880), Nature Near London (1883), After London; or, Wild England (1884), The Life of the Fields (1884), The Open Air (1885), and Field and Hedgerow (1889). --This text refers to the Paperback edition. Show more
add to favoritesadd In favorites 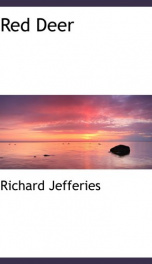 red deer Series: Unknown Year: Unknown Raiting: 3/5 Originally published in 1892. This volume from the Cornell University Library's print collections was scanned on an APT BookScan and converted to JPG 2000 format by Kirtas Technologies. All titles scanned cover to cover and pages may include marks notations and other marginalia present in the original volume. --This text refers to the Paperback edition. Show more
add to favoritesadd In favorites

jefferies land a history of swindon and its environs edited with notes by gra Series: Unknown Year: Unknown Raiting: 4/5 Show more
add to favoritesadd In favorites

a memoir of the goddards of north wilts Series: Unknown Year: Unknown Raiting: 5/5 Show more
add to favoritesadd In favorites

Amaryllis at the Fair Series: Unknown Year: Unknown Raiting: 2.5/5 CD-ROM Edition. Not a DVD, not an audio CD, no illustrations. Produced in a Microsoft Compatible Format for reading, printing or research. About the Author: John Richard Jefferies (6 November 1848 - 14 August 1887) was an English nature writer, noted for his depiction of English rural life in essays, books of natural history, and novels. His childhood on a small Wiltshire farm had a great influence on him and provides the background to all his major works of fiction. For all that, these show a remarkable diversity, including Bevis (1882), a classic children's book, and After London (1885), an early work of science fiction. For much of his adult life, he suffered from tuberculosis, and his struggles with the illness and with poverty also play a role in his writing. Jefferies valued and cultivated an intensity of feeling in his experience of the world around him, a cultivation that he describes in detail in The Story of My Heart (1883). This work, an introspective depiction of his thoughts and feelings on the world, gained him the reputation of a nature mystic at the time. But it is his success in conveying his awareness of nature and people within it, both in his fiction and in essay collections such as The Amateur Poacher (1879) and Round About a Great Estate (1880), that has drawn most admirers. Walter Besant wrote of his reaction on first reading Jefferies: "Why, we must have been blind all our lives; here were the most wonderful things possible going on under our very noses, but we saw them not. Show more
add to favoritesadd In favorites 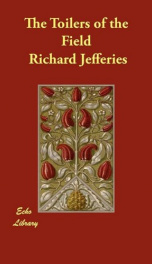 The Toilers of the Field Series: Unknown Year: Unknown Raiting: 5/5 A collection of articles which first appeared in Fraser's Magazine and Longman's Magazine published posthumously in book form in 1892. Show more
add to favoritesadd In favorites