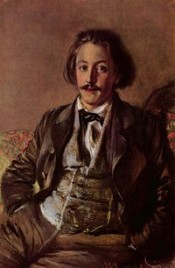 Paul Johann Ludwig von Heyse (March 15, 1830 - April 2, 1914) was a distinguished German author. Paul von Heyse was born in Berlin, Germany, the son of Karl Wilhelm Ludwig Heyse, a notable philologist, and Julie Saaling. Saaling, his mother, was the daughter of a prominent Jewish family, a well-to-do court jeweler related to Felix Mendelssohn. He was educated in Berlin and at Bonn, where he studied classical languages. Afterwards, he translated many Italian poets. He also wrote short stories and published several novels, the most famous being Kinder der Welt ("Children of the World", 1873). In Berlin he was member of the poets' society "Tunnel über der Spree", in Munich together with Emanuel Geibel and others in the poets' society "Krokodil" (Crocodile). He wrote books, poems, and about 60 dramas. The sum of Heyse's many and varied productions has made him a dominant figure among German men of letters. He was awarded the Nobel Prize for Literature in 1910 "as a tribute to the consummate artistry, permeated with idealism, which he has demonstrated during his long productive career as a lyric poet, dramatist, novelist and writer of world-renowned short stories". Wirsen, one of the Nobel judges, said 'Germany has not had a greater literary genius since Goethe'. Heyse is the third oldest laureate in literature, after Doris Lessing and Theodor Mommsen. Sully Prudhomme (1901) · Theodor Mommsen (1902) · Bjørnstjerne Bjørnson (1903) · Frédéric Mistral / José Echegaray (1904) · Henryk Sienkiewicz (1905) · Giosuè Carducci (1906) · Rudyard Kipling (1907) · Rudolf Eucken (1908) · Selma Lagerlöf (1909) · Paul von Heyse (1910) · Maurice Maeterlinck (1911) · Gerhart Hauptmann (1912) · Rabindranath Tagore (1913) · Romain Rolland (1915) · Verner von Heidenstam (1916) · Karl Gjellerup / Henrik Pontoppidan (1917) · Carl Spitteler (1919) · Knut Hamsun (1920) · Anatole France (1921) · Jacinto Benavente (1922) · William Butler Yeats (1923) · Władysław Reymont (1924) · George Bernard Shaw (1925)
Show more
add to favoritesadd In favorites

in paradise a novel from the german of paul heyse volume 1 Series: Unknown Year: Unknown Raiting: 4/5 Show more
add to favoritesadd In favorites

Andrea Delfin Series: Unknown Year: Unknown Raiting: 1.5/5 In that Venetian alley which bears the friendly name of "BellaCortesia", there was, in the middle of the past century, thesimple, one-story house of a common family; over its low portal,framed by two wooden spiral columns and a baroque ledge, residedan image of the Madonna in a niche, and an eternal flame flickeredhumbly behind its red glass. Entering the lower corridor, onewould have found oneself at the foot of a broad, steep staircase,which, without any bents, went straight up to the rooms upstairs.Here also, a lamp burnt day and night, which hang by shiny,delicate chains from the ceiling, since daylight could only enterinside, whenever the front door happened to be opened. But inspite of this everlasting gloom, the staircase was the place whereSignora Giovanna Danieli, the owner of the house, liked to sit themost. Since the death of her husband, she inhabited the inheritedhouse together with Marietta, her only daughter, and let a fewunneeded rooms to quiet lodgers. She maintained that the tearsshe had cried for her dear husband had weakened her eyes too muchto be still able to withstand direct sunlight. But the neighbourssaid about her that the only reason for her continued presence atthe top of the stairs, from morning until nightfall, was to enableher to start a conversation with everyone leaving or entering thehouse and not to let him pass, before he had payed his dues to hercuriosity and her talkative nature. At the time when we are nowabout to make her acquaintance, this could hardly have been thereason for her preferring the hard seat of the stairs over acomfortable armchair. It was in August of the year 1762. Forhalf a year, the rooms she used to let were empty, and she hadonly little contact with her neighbours. Furthermore, night hadalready fallen, and a visit at this time of day would have beenquite unusual. Nevertheless, the little woman sat persistently ather post and thoughtfully looked down the empty corridor. She hadsent her child to bed and had placed a few pumpkins by her side,to take out the seeds before she would go to sleep. But all kindsof thoughts and ideas had made her forget her task. Her handsrested in her lap, her head was leaning against the banister; ithad not been the first time that she had fallen asleep in thisposition.Today, it had almost happened to her again, when three slow, butforceful, thumps to the front door suddenly made her start."Misericordia!" said the woman, as she was getting up, butremained standing there motionlessly, "what's this? Have Idreamt? Could it really be him?" Show more
add to favoritesadd In favorites