Edward Everett Hale (April 3, 1822 – June 10, 1909) was an American author and Unitarian clergyman. Hale was born on April 3, 1822,[1] in Roxbury, Massachusetts, the son of Nathan Hale (1784-1863), proprietor and editor of the Boston Daily Advertiser, and the brother of Lucretia Peabody Hale. Edward Hale was the nephew of Edward Everett, the orator and statesman, while his father was the nephew of Nathan Hale who was executed by the British for espionage during the Revolutionary War. Edward Hale graduated from Harvard in 1839; was pastor of the Church of the Unity, Worcester, Massachusetts, in 1846-1856, and of the South Congregational (Unitarian) church, Boston, in 1856-1899. In 1903 he became Chaplain of the United States Senate. Hale married Emily Baldwin Perkins in 1852—she was the niece of Connecticut Governor & US Senator Roger Sherman Baldwin and Emily Pitkin Perkins Baldwin on her father's side and Harriet Beecher Stowe and Henry Ward Beecher on her mother's side. They had nine children: one daughter and eight sons. Hale died in Roxbury, by then part of Boston, in 1909. Combining a forceful personality, organizing genius, and liberal practical theology, Hale was active in raising the tone of American life for half a century. He had a deep interest in the anti-slavery movement (especially in Kansas), as well as popular education (especially Chautauquas), and the working-man's home. He was a constant and voluminous contributor to newspapers and magazines. He was an assistant editor of the Boston Daily Advertiser and edited the Christian Examiner, Old and New (which he assisted in founding in 1869 and which merged with Scribner's Magazine in 1875), Lend a Hand (which he founded in 1886 and which merged with the Charities Review in 1897), and the Lend a Hand Record. He was the author or editor of more than sixty books—fiction, travel, sermons, biography and history. Hale first came to notice as a writer in 1859, when he contributed the short story "My Double and How He Undid Me" to the Atlantic Monthly. He soon published other stories in the same periodical. The best known of these was "The Man Without a Country" (1863), which did much to strengthen the Union cause in the North, and in which, as in some of his other non-romantic tales, he employed a minute realism which led his readers to suppose the narrative a record of fact. These two stories and such others as "The Rag-Man and the Rag-Woman" and "The Skeleton in the Closet," gave him a prominent position among short-story writers of 19th century America. His short story "The Brick Moon", serialized in the Atlantic Monthly, is the first known fictional description of an artificial satellite. It was possibly an influence on the novel The Begum's Fortune by Jules Verne. The story "Ten Times One is Ten" (1870), with its hero Harry Wadsworth, contained the motto, first enunciated in 1869 in his Lowell Institute lectures: "Look up and not down, look forward and not back, look out and not in, and lend a hand." This motto was the basis for the formation of Lend-a-Hand Clubs, Look-up Legions and Harry Wadsworth Clubs for young people. Out of the romantic Waldensian story "In His Name" (1873) there similarly grew several other organizations for religious work, such as King's Daughters, and King's Sons. Hale once said, "I am only one, but I am one. I cannot do everything, but I can do something. What I can do, I should do and, with the help of God, I will do."
Show more
add to favoritesadd In favorites

The Life of Columbus From His Own Letters and Journals and Other Documents of His Time Series: Unknown Year: Unknown Raiting: 4.5/5 Show more
add to favoritesadd In favorites

The Life of Columbus From His Own Letters and Journals and Other Documents of His Time Series: Unknown Year: Unknown Raiting: 4.5/5 Show more
add to favoritesadd In favorites 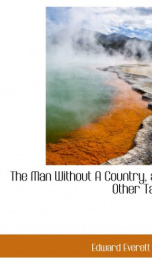 The Man Without a Country and Other Tales Series: Unknown Year: Unknown Raiting: 2.5/5 Purchase of this book includes free trial access to www.million-books.com where you can read more than a million books for free. This is an OCR edition with typos. Excerpt from book: THE SOUTH AMERICAN EDITOR 1 Am tempted to include this little burlesque in this collection simply in memory of the Boston Miscellany, the magazine in which it was published, which won for itself a brilliant reputation in its short career. There was not a large staff of writers for the Miscellany, but many of the names then unknown have since won distinction. To quote them in the accidental order in which I find them in the table of contents, where they are arranged by the alphabetical order of the several papers, the Miscellany contributors were Edward Everett, George Lunt, Nathan Hale, Jr., Nathaniel Hawthorne, N. P. Willis, W. W. Story, J. E. Lowell, C. N. Emerson, Alexander H. Everett, Sarah P. Hale, W. A. Jones, Cornelius Matthews, Mrs. Kirkland, J. W. Ingraham, H. T. Tuckerman, Evart A. Duyckinck, Francis A. Durivage, Mrs. J. Webb, Charles F. Powell, Charles W. Storey, Lucretia P. Hale, Charles F. Briggs, William E. Channing, Charles Lanman, G. H. Hastings, and Elizabeth B. Barrett, now Mrs. Browning, some of whose earliest poems were published in this magazine. These are all the contributors whose names appear, excepting the writers of a few verses. They furnished nine tenths of the contents of the magazine. The two Everetts, powell. William Story, and my brother, who was the editor, were the principal contributors. And am tempted to say that I think they all put some of their best work upon this magazine. The misfortune of the Miscellany, I suppose, was that its publishers had no capital. They had to resort to the claptraps of fashion-plates and other engravings, in the hope of forcing animmediate sale upon persons who, caring for fashion-plates, did not care for the literary character of the enterprise. It gave a very happy escape-pipe, however, for the high spirit... --This text refers to an alternate Paperback edition. Show more
add to favoritesadd In favorites 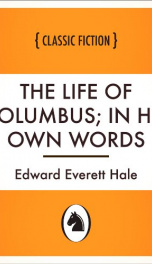 The Life of Columbus Series: Unknown Year: Unknown Raiting: 1.5/5 Columbus’ biography by Edward Everett Hale, an American author of the nineteenth century, a clergyman, editor, abolitionist and the author or editor of more than sixty books—fiction, utopian novels, travel, sermons, biography and history. From the preface: This book contains a life of Columbus, written with the hope of interesting all classes of readers. His life has often been written, and it has sometimes been well written. The great book of our countryman, Washington Irving, is a noble model of diligent work given to a very difficult subject. And I think every person who has dealt with the life of Columbus since Irving's time, has expressed his gratitude and respect for the author. Show more
add to favoritesadd In favorites 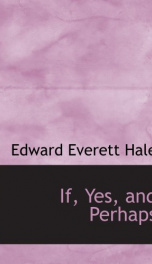 If, Yes and Perhaps Series: Unknown Year: Unknown Raiting: 2.5/5 Excerpt from the book..."Felix," said my wife to me, as I came home to-night, "you will have togo to the pork-barrel.""Are you quite sure," said I,--"quite sure? 'Woe to him,' says theoracle, 'who goes to the pork-barrel before the moment of his need.'""And woe to him, say I," replied my brave wife,--"woe and disaster tohim; but the moment of our need has come. The figures are here, and youshall see. I have it all in black and in white." Show more
add to favoritesadd In favorites 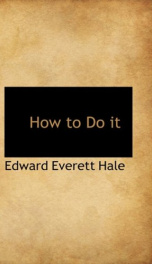 How to Do It Series: Unknown Year: Unknown Raiting: 1.5/5 A self-help essay by Edward Everett Hale, an American author of the nineteenth century, a clergyman, editor, abolitionist and the author or editor of more than sixty books—fiction, utopian novels, travel, sermons, biography and history. This is a Victorian era view of how to conduct yourself, how to talk, read, write, what to read, how to travel and go into society, live with children and your adults, and even habits to develop for church. Show more
add to favoritesadd In favorites

The Brick Moon and Other Stories Series: Unknown Year: Unknown Raiting: 4.5/5 It all began more than thirty years ago when we were in college; as most good things begin. We were studying in the book which has gray sides and a green back and is called "Cambridge Astronomy" because it is translated from the French…' (Excerpt from Chapter 1) Show more
add to favoritesadd In favorites