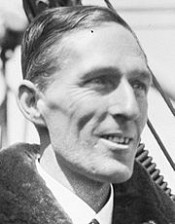 Sir Philip Gibbs (May 1, 1877 - March 10, 1962) was an English journalist and novelist who served as one of five official British reporters during the First World War. Two of his siblings were also writers, A. Hamilton Gibbs and Cosmo Hamilton. The son of a civil servant, Gibbs was born in London and received a home education and determined at an early age to develop a career as a writer. His debut article was published in 1894 in the Daily Chronicle; five years later he published the first of many books, Founders of the Empire. Gibbs received a major boost when he was given the post of literary editor at Alfred Harmsworth's leading (and growing) tabloid newspaper the Daily Mail. He subsequently worked on other prominent newspapers including the Daily Express. His first attempt at semi-fiction was published in 1909 as The Street of Adventure, which recounted the story of the official Liberal newspaper Tribune, founded in 1906 and failing spectacularly in 1908. The paper was founded at vast expense by Franklin Thomasson, MP for Leicester 1906 to 1910 and featured one of the most distinguished staffs ever known in journalism, including H. Brailsford , J. L. Hammond and L. Hobhouse . A man of decidedly liberal views Gibbs took an interest in popular movements of the time, including the suffragettes, publishing a book on the movement in 1910. With tensions growing in Europe in the years immediately preceding 1914, Gibbs repeatedly expressed a belief that war could be avoided between the Entente and Central Powers. In the event war broke out in Europe in August 1914 and Gibbs secured an early journalistic posting to the Western Front. It was not long however before the War Office in London resolved to 'manage' popular reporting of the war - i.e. via censorship - and Gibbs was denied permission to remain on the Western Front. Nevertheless stubbornly refusing to return Gibbs was duly arrested and sent home. Gibbs was not long out of official favour however. Along with four other men he was officially accredited as a wartime correspondent, his work appearing in the Daily Telegraph and Daily Chronicle. The price he had to pay for his accreditation was to submit to effective censorship: all of his work was to be vetted by C. E. Montague, formerly of the Manchester Guardian. Although unhappy with the arrangement he nonetheless agreed. Gibbs' wartime output was prodigious. He not only produced a stream of newspaper articles but also a series of books: The Soul of the War (1915), The Battle of the Somme (1917), From Bapaume to Passchendaele (1918) and The Realities of War (1920). In the latter work Gibbs exacted a form of revenge for the frustration he suffered in submitting to wartime censorship; published after the armistice The Realities of War painted a most unflattering portrait of Sir Douglas Haig, British Commander-in-Chief in France and Flanders, and his General Headquarters. Gibbs also published Now It Can Be Told (1920), an account of his personal experiences in war-torn Europe. Frustration or no, however, Gibbs gratefully accepted a proffered knighthood at the close of the war. His post-war career continued to be as varied as ever. Embarking shortly after the war upon a lecture tour of the U.S. he also secured the first journalistic interview with a Pope. Working as a freelance journalist - having resigned from the Daily Chronicle over its support for the Lloyd George government's Irish policy (Gibbs was a Roman Catholic) - he published a series of additional books and articles, including a book of autobiography, Adventures in Journalism (1923). The outbreak of the Second World War in 1939 brought Gibbs a renewed appointment as a wartime correspondent, this time for the Daily Sketch. This proved a brief stint however and he spent part of the war employed by the British Ministry of Information. In 1946 he published another volume of memoirs The Pageant of the Years; two further volumes followed in 1949 and 1957: Crowded Company and Life's Adventure, respectively. He died at Godalming on 10 March 1962.
Show more
add to favoritesadd In favorites

People of DestinyAmericans as I saw them at Home and Abroad Series: Unknown Year: Unknown Raiting: 4/5 Show more
add to favoritesadd In favorites 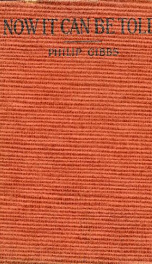 People of DestinyAmericans as I saw them at Home and Abroad Series: Unknown Year: Unknown Raiting: 4/5 Show more
add to favoritesadd In favorites