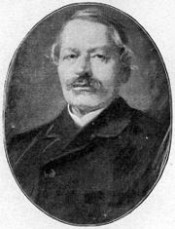 Gustav Freytag (13 July 1816 – 30 April 1895) was a German dramatist and novelist. Freytag was born in Kreuzburg (Kluczbork) in Silesia. After attending the gymnasium at Oels (Oleśnica), he studied philology at the universities of Breslau (Wrocław) and Berlin, and in 1838 received his degree with a remarkable dissertation, De initiis poeseos scenicae apud Germanos. In 1839, he settled at Breslau, as Privatdozent in German language and literature, but devoted his principal attention to writing for the stage, achieving considerable success with the comedy Die Brautfahrt, oder Kunz von der Rosen (1844). This was followed by a volume of unimportant poems, In Breslau (1845), and the dramas Die Valentine (1846) and Graf Waldemar (1847). He at last attained a prominent position by his comedy, Die Journalisten (1853), one of the best German comedies of the 19th century. In 1847, Freytag migrated to Berlin, and in the following year took over, in conjunction with Julian Schmidt, the editorship of Die Grenzboten, a weekly journal which, founded in 1841, now became the leading organ of German and Austrian liberalism. Freytag helped to conduct it until 1861, and again from 1867 till 1870, when for a short time he edited a new periodical, Im neuen Reich. In 1863 he developed what is known as Freytag´s pyramid, see dramatic structure. Freytag died in 1895 in Wiesbaden. Freytag's literary fame was made universal by the publication in 1855 of his novel, Soll und Haben (Debit and Credit), which was translated into almost all the languages of Europe, including English by Georgiana Harcourt in 1857 . It was hailed as one the best German novels of its day, noted for its sturdy but unexaggerated realism, and in many parts highly humorous. Its main purpose is the recommendation of the German middle class as the soundest element in the nation, but it also has a more directly patriotic intention in the contrast it draws between the homely virtues of the German, the shiftlessness of the Pole and the rapacity of the Jew. As a Silesian, Freytag had no great love for his Slavic neighbors, and being a native of a province which in his mind owed everything to the Kingdom of Prussia, he was naturally an earnest champion of Prussian hegemony over Germany. His powerful advocacy of this idea in his Grenzboten gained him the friendship of the Duke of Saxe-Coburg-Gotha, whose neighbor he had become, on acquiring the estate of Siebleben near Gotha. At the duke's request, Freytag was attached to the staff of the Crown Prince of Prussia in the Franco-Prussian War of 1870-71, and was present at the Battles of Worth and Sedan. Before this, he had published another novel, Die verlorene Handschrift (1864), in which he endeavoured to do for German university life what Soll und Haben had done for commercial life. The hero is a young German professor, who is so wrapped up in his search for a manuscript by Tacitus that he is oblivious to an impending tragedy in his domestic life. The book was, however, less successful than its predecessor. Between 1859 and 1867, Freytag published in five volumes Bilder aus der deutschen Vergangenheit, a valuable work on popular lines, illustrating the history and manners of Germany. In 1872, he began a work with a similar patriotic purpose, Die Ahnen, a series of historical romances in which he unfolds the history of a German family from the earliest times to the middle of the 19th century. The series comprises the following novels, none of which, however, reaches the level of Freytag's earlier books: Freytag's other works include: Freytag's Gesammelte Werke were published in 22 volumes, at Leipzig (1886-1888); his Vermischte Aufsatze have been edited by E. Elster, autobiography mentioned above, the lives by C. Alberti (Leipzig, 1890) and F. Seiler (Leipzig, 1898).
Show more
add to favoritesadd In favorites

Pictures of German Life in the XVIIIth and XIXth Centuries,Vol. I. Series: Unknown Year: Unknown Raiting: 3/5 Show more
add to favoritesadd In favorites

Pictures of German Life in the XVIIIth and XIXth Centuries,Vol. I. Series: Unknown Year: Unknown Raiting: 3/5 Show more
add to favoritesadd In favorites 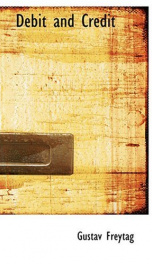 Debit and Credit Series: Unknown Year: Unknown Raiting: 4.5/5 This volume is produced from digital images created through the University of Michigan University Library's large-scale digitization efforts. The Library seeks to preserve the intellectual content of items in a manner that facilitates and promotes a variety of uses. The digital reformatting process results in an electronic version of the original text that can be both accessed online and used to create new print copies. The Library also understands and values the usefulness of print and makes reprints available to the public whenever possible. This book and hundreds of thousands of others can be found in the HathiTrust, an archive of the digitized collections of many great research libraries. For access to the University of Michigan Library's digital collections, please see http://www.lib.umich.edu and for information about the HathiTrust, please visit http://www.hathitrust.org --This text refers to the Paperback edition. Show more
add to favoritesadd In favorites