George William Foote (11 January 1850 – 17 October 1915) was a secularist and journal editor. He was born in Plymouth, England and brought up in the Anglican tradition. He moved to London in 1868, where he became involved with the secularism, freethought and republicanism, joining the Young Men's Secular Association, the National Secular Society, and contributing to Charles Bradlaugh's National Reformer. In 1877 Foote joined the anti-Bradlaughites in the breakaway British Secular Union. The split was caused by several factors: Bradlaugh's alleged autocratic style; Bradlaugh's association with Annie Besant; and Bradlaugh and Besant's involvement in promoting birth control and Neo-Malthusianism. The BSU was relatively short-lived, and Foote himself was reconciled to Bradlaugh within a few years, becoming an NSS vice-president from 1882. The Secularist, Foote's first (1876) attempt to launch his own publication, in collaboration with George Jacob Holyoake, did not last long. In May, 1881, Foote started a serial publication called The Freethinker which is still published. As a result of contents of this journal, Foote was charged with blasphemy, and eventually imprisoned for one year. His description of this experience was published in 1886 as Prisoner for Blasphemy. Once released, Foote continued to be very active promoting his ideals, writing books and pamphlets, lecturing, and debating. Foote was well-versed in literature, and had extensive knowledge of ancient and contemporary writers, and ecclesiastical history. In 1890 Foote succeeded Bradlaugh as President of the National Secular Society and remained in that role for twenty-five years. His death was related by Chapman Cohen in The Freethinker (October 31, 1915): When I saw him on the Friday (two days) before his death he said, "I have had another setback, but I am a curious fellow and may get all right again." But he looked the fact of death in the face with the same courage and determination that he faced Judge North many years ago. A few hours before he died he said calmly to those around him, "I am dying." And when the end came his head dropped back on the pillow, and with a quiet sigh, as of one falling to sleep, he passed away. [1]
Show more
add to favoritesadd In favorites

Voltaire: A Sketch of his Life and Works Series: Unknown Year: Unknown Raiting: 4/5 Show more
add to favoritesadd In favorites

Voltaire: A Sketch of his Life and Works Series: Unknown Year: Unknown Raiting: 4/5 Show more
add to favoritesadd In favorites

The Book Of GodIn The Light Of The Higher Criticism Series: Unknown Year: Unknown Raiting: 3.5/5 Show more
add to favoritesadd In favorites

The Book Of GodIn The Light Of The Higher Criticism Series: Unknown Year: Unknown Raiting: 3.5/5 Show more
add to favoritesadd In favorites 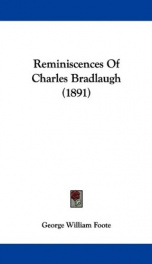 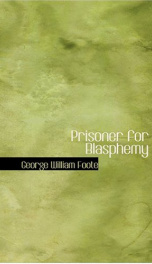 Prisoner for Blasphemy Series: Unknown Year: Unknown Raiting: 4.5/5 Persecution is not refutation, nor even triumph: the "wretched infidel" as he is called, is probably happier in his prison than the proudest of his assailants." BYRON. --This text refers to the Paperback edition. Show more
add to favoritesadd In favorites 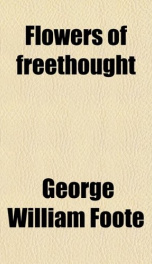 Flowers of Freethought Series: Unknown Year: Unknown Raiting: 3/5 Purchase of this book includes free trial access to www.million-books.com where you can read more than a million books for free. This is an OCR edition with typos. Excerpt from book: THE SONS OF GOD. " The sons of Bod saw the daughters of men that they were fair." Genesis vi. 8. According to the first book of the Bible, the earth fell into a very wicked condition in the days of the patriarchs. God made everything good, but the Devil turned everything bad; and in the end the Lord put the whole concern into liquidation. It was a case of universal bankruptcy. All that was saved out of the catastrophe was a consignment of eight human beings and an unknown number of elephants, crocodiles, horses, pigs, dogs, cats, and fleas. Among other enormities of the antediluvian world was the fondness shown by the sons of God for the daughters of men. That fondness has continued ever since. The deluge itself could not wash out the amatory feelings with which the pious males regard those fair creatures who were once supposed to be the Devil's chief agents on earth. Even to this day it is a fact that courtship goes on with remarkable briskness in religious circles. Churches and chapels are places of harmless assignation, and how many matches are made in Sunday-schools, where Alfred and Angelina meet to teach the scripture and flirt. As for the clergy, who are peculiarly the sons of God, they are notorious for their partiality to the sex. They purr about the ladies like black tom-cats. Some of them are adepts in the art of rolling one eye heavenwards and letting the other languish on the fair faces of the daughters of men. It is also noticeable that the Protestant clericals marry early and often, and generally beget a numerous progeny; while the Catholic priest who, being strictly celibate, never adds to the population, "mashes" the ladies through the confessional, worming out all their secrets, and makingthem as pliable as wax in his holy hands. Too often the professio... Show more
add to favoritesadd In favorites 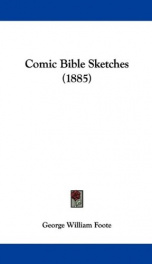 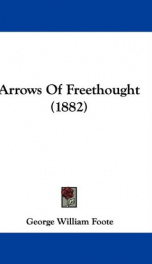 Arrows of Freethought Series: Unknown Year: Unknown Raiting: 4/5 CONTENTS:PREFACE RELIGION AND PROGRESS. A DEFENCE OF THOMAS PAINE. THE GOSPEL OF FREETHOUGHT. FREETHOUGHT IN CURRENT LITERATURE. DEAN STANLEY'S LATEST. GOD AND THE QUEEN. CARDINAL NEWMAN ON INFIDELITY. SUNDAY TYRANNY. WHO ARE THE BLASPHEMERS? THE BIRTH OF CHRIST. THE REIGN OF CHRIST. THE PRIMATE ON MODERN INFIDELITY. BAITING A BISHOP. PROFESSOR FLINT ON ATHEISM. A HIDDEN GOD. GENERAL JOSHUA. GOING TO HELL. CHRISTMAS EVE IN HEAVEN. PROFESSOR BLACKIE ON ATHEISM. SALVATIONISM. A PIOUS SHOWMAN. --This text refers to the Kindle Edition edition. Show more
add to favoritesadd In favorites