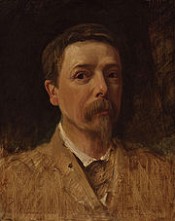 George Louis Palmella Busson du Maurier (6 March 1834 – 8 October 1896) was a French-born British author and cartoonist. He studied art in Paris, and moved to Antwerp, Belgium, where he lost vision in his left eye. He consulted an oculist in Düsseldorf, Germany, where he met his future wife, Emma Wightwick. He followed her family to London, where he married Emma in 1863. He became a member of the staff of the satirical magazine Punch in 1865, drawing two cartoons a week. His most famous cartoon, "True Humility", was the origin of the expressions "good in parts" and "a curate's egg". (In the caption, a bishop addresses a curate [a very humble class of clergyman] whom he has condescended to invite to breakfast: 'I'm afraid you've got a bad egg, Mr. Jones.' The curate deprecatingly replies, 'Oh no, my Lord, I assure you - parts of it are excellent!') In an earlier (1884) cartoon, du Maurier had coined the expression 'bedside manner'. Owing to his deteriorating eyesight, du Maurier reduced his involvement with Punch in 1891 and settled in Hampstead, where he wrote three novels (the last was published posthumously). His second novel Trilby, published in 1894 fits into the gothic horror genre which was undergoing a revival during the fin de siecle. The story of the poor artist's model Trilby O'Ferrall, transformed into a diva under the spell of the evil musical genius Svengali, created a sensation. Soap, songs, dances, toothpaste, and Trilby, Florida were all named for the heroine, and a variety of soft felt hat with an indented crown (worn in the London stage production of a dramatization of the novel) came to be called a trilby. The plot inspired Gaston Leroux's 1910 potboiler Phantom of the Opera and the innumerable works derived from it. Although initially bemused by Trilby's success, du Maurier eventually came to despise the persistent attention given to his novel. A notable cartoon George du Maurier made, was a cartoon of a television/videophone conversation in 1879, the telephonoscope. George du Maurier was a close friend of Henry James, the novelist; their relationship was fictionalised in David Lodge's Author, Author. George du Maurier was the father of actor Gerald du Maurier and grandfather of the writers Angela du Maurier and Dame Daphne du Maurier. He was also the father of Sylvia Llewelyn Davies and thus grandfather of the five boys who inspired Peter Pan. He was interred in Saint John's Churchyard in Hampstead parish in London.
Show more
add to favoritesadd In favorites 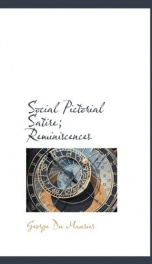 Social Pictorial Satire Series: Unknown Year: Unknown Raiting: 3.5/5 Books for All Kinds of Readers. ReadHowYouWant offers the widest selection of on-demand, accessible format editions on the market today. Our 7 different sizes of EasyRead are optimized by increasing the font size and spacing between the words and the letters. We partner with leading publishers around the globe. Our goal is to have accessible editions simultaneously released with publishers' new books so that all readers can have access to the books they want to read. To find more books in your format visit www.readhowyouwant.com --This text refers to an alternate Paperback edition. Show more
add to favoritesadd In favorites