Sir Frederic George Kenyon GBE KCB TD FBA FSA (15 January 1863 – 23 August 1952) was a British paleographer, biblical and classical scholar. He was the director of the British Museum. He was also the president of the British Academy from 1917 to 1921, and from 1918 to 1952 he was Gentleman Usher of the Purple Rod. Kenyon was born in London, the son of John Robert Kenyon, Vinerian Professor of English Law at Oxford. Educated at Magdalen College, Oxford, he joined the British Museum in 1889 and rose to be its Director and Head Librarian by 1909. He was knighted for his services in 1912. In 1891, Kenyon edited the editio princeps of the Aristotelian Constitution of Athens. In 1920, he was appointed president of the British School of Archaeology in Jerusalem. He spent most of his retirement researching and publishing ancient papyri. He died on 23 August 1952. Kenyon was a noted scholar of ancient languages, and made a life-long study of the Bible, especially the New Testament as an historical text. His book Our Bible and the Ancient Manuscripts (1895) alleges to show how Egyptian papyri and other evidence from archeology can corroborate the narrative of historical events in the Gospel. He was convinced of the historical reality of the events described in the New Testament - and is often quoted by those who share this view (viz. The Alpha Course) - most commonly with these words: “the last foundation for any doubt that the Scriptures have come down to us substantially as they were written has now been removed.” [1] Kenyon's eldest daughter was the British archaeologist Dame Kathleen Kenyon.
Show more
add to favoritesadd In favorites 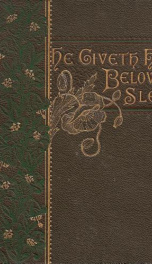 'He Giveth His Beloved Sleep' Series: Unknown Year: Unknown Raiting: 4.5/5 "Excerpt from the book..." OF all the thoughts of God that are Borne inward unto souls afar, Along the Psalmist's music deep, Now tell me if that any is, For gift or grace, surpassing this-- 'He giveth His beloved, sleep'! --This text refers to the Kindle Edition edition. Show more
add to favoritesadd In favorites