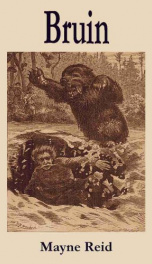 an excerpt from: Chapter One. The Palace Grodonoff. On the banks of the Neva, near the great city of Saint Petersburg, stands a splendid palace, known as the Palace Grodonoff. It is the property of a Russian nobleman of that name, as it is also his place of residence. Were you to drive up to the front gate of this grand palace, you would see a coat-of-arms sculptured in granite over the entrance. In this piece of sculpture, the principal and most striking figure is a bear, with the blade of a knife buried in his breast, the haft being clutched by a human hand! Open the gate, and enter the spacious courtyard. Inside, on the right and left, you will observe two live bears-both of chestnut-brown colour, and each of them as big as a buffalo. You cannot fail to notice them, for, ten chances to one, they will rush towards you with fierce growls; and were it not that a strong chain hinders them from reaching you, you might have reason to repent having entered the courtyard of the palace Grodonoff. Look around you in the courtyard and over the different doors that open upon it; you will again see the crest of the bear, sculptured in stone; you will see it over the stables, the coach-house, the granary, the kitchens,-everywhere. You may know by all this, that it is the coat-of-arms of the Baron Grodonoff, whose crest is a bear with a blade buried in its breast, and a human band clutching the haft. You will naturally conclude that there is some history connected with this singular tableau-that it is the commemoration of some deed done by a Grodonoff, entitling him to use the bear as his heraldic device. This is quite true; and if you enter the picture-gallery of the palace, you will there behold the deed more explicitly represented, in a large oil-painting hung conspicuously in the centre of the wall. The scene of this painting is a forest of old trees, whose grey, gnarled trunks stand thickly over the ground. There is only a little open space or glade in the middle; and this is occupied by three figures, two men and a bear. The bear is between the two men; or, rather, one of the men is prostrate upon the ground-where he has been struck down by a blow from Bruin-s paw-while the huge animal stands over him reared up on his hind quarters. The other man is upon his feet, apparently engaged in a desperate wrestle with the fierce brute, and likely to prove the conqueror-as he has already buried the blade of a large hunting-knife in the animal-s breast, and directly over the region of its heart. Indeed, the shaggy monster already shows signs of succumbing. His paw has dropped from the shoulder of his antagonist, his long tongue lolls out, the blood rushes from his mouth and nostrils, and it is evident that his strength is fast forsaking him, and that he will soon sink lifeless upon the earth. You will notice that the two men who figure in the painting are very dissimilar in appearance.
Show more
add to favoritesadd In favorites

The Finger of FateA Romance 4/5

Odd PeopleBeing a Popular Description of Singular Races of Man 4.5/5

The Lost MountainA Tale of Sonora 5/5

Osceola the SeminoleThe Red Fawn of the Flower Land 4.5/5

The Guerilla ChiefAnd other Tales 5/5

Afloat in the ForestA Voyage among the Tree-Tops 2.5/5

The BandoleroA Marriage among the Mountains 4/5

Gwen WynnA Romance of the Wye 3/5

The Fatal CordAnd The Falcon Rover 4.5/5

The Vee-BoersA Tale of Adventure in Southern Africa 5/5

The Wild HuntressLove in the Wilderness 4/5

The Free LancesA Romance of the Mexican Valley 4/5