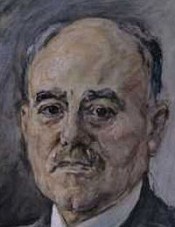 Hermann Sudermann (September 30, 1857 – November 21, 1928) was a German dramatist and novelist. He was born at Matzicken, a village just to the east of Heydekrug in the Province of Prussia (now Macikai and Šilutė, in southwestern Lithuania), close to the Russian frontier. The Sudermanns were a Mennonite family long settled near Elbing (now Elbląg). His father owned a small brewery in Heydekrug, and Sudermann received his early education at the Realschule in Elbing, but, his parents having been reduced in circumstances, he was apprenticed to a chemist at the age of fourteen. He was, however, able to enter the Realgymnasium (high school) in Tilsit, and to study philosophy and history at Königsberg University. In order to complete his studies Sudermann went to Berlin, where he was tutor to several families. Next he became a journalist, and was in 1881 and 1882 the editor of the Deutsches Reichsblatt. He then devoted himself to fiction, beginning with a collection of naturalistic short stories called Im Zwielicht ("At Twilight", 1886). His novels, Frau Sorge ("Dame Care", 1887), Geschwister ("Siblings", 1888) and Der Katzensteg ("Cats' Bridge", 1890) failed to bring the young author as much recognition as his first drama Die Ehre ("Honour", 1889), which inaugurated a new period in the history of the German stage. He married the novelist Clara Lauckner, née Schulz on 20 October 1891. She had already had three children from her previous short-lived marriage, and she would have one child with Sudermann: a daughter, Hede. They lived in Königsberg for the next two years, before moving to Dresden, and then Berlin in 1895. They were not particularly happy together. Another successful drama, Heimat (1893), was translated into English as Magda, and productions featured some of the best known actresses of the time including Helena Modjeska, Sarah Bernhardt, Eleonora Duse, and Mrs Patrick Campbell. He even had a large following in Japan. Throughout the 20th century, his plays have been the basis of more than thirty films. Sudermann returned to novels with Es War ("It Was", 1894, the title referring to Section 2, §1 of Nietzsche's Unzeitgemässe Betrachtungen). In 1902, he moved to a mansion with extensive grounds at Blankensee, and used his newfound wealth to collect paintings and sculpture, and to take trips to Italy, Greece, Egypt and India. At the commencement of World War I, Sudermann was enthusiastic, publishing a Kaiserlied ("Song of the Kaiser"). In autumn 1917, he organised the Frohe Abende ("Cheery Evenings"), a programme promoting artistic endeavours among the common people, for which he received an Iron Cross Second Class on 5 April 1918. After the end of the war he helped found the Bund schaffender Künstler ("Society of Creative Artists"), which posed as a centrist political force and which earned him the reputation of an opportunist. The most important of his later works are Litauischen Geschichten ("Lithuanian Stories", 1917), a realistic portrait of his homeland, and a volume of memoirs in 1922. His last major work, written after the death of his wife in 1924, was Die Frau des Steffen Tromholt ("The Wife of Steffen Tromholt", 1927), a semi-autobiographical novel. He had a stroke in 1928, and died of a lung infection shortly afterwards, in Berlin, aged 71. His stepson Rolf Lauckner set up the Hermann Sudermann Foundation to support young dramatists. Sudermann's nationalism, and his delight in romanticized ideas of ethnicity and homeland, particularly noticeable in his later works, made him a favourite during World War II. Jürgen Fehling staged Johannisfeuer in Berlin, with Maria Gorvin, Maria Koppenhöfer and Paul Wegener in the lead roles. After 1945 his plays and novels were almost completely forgotten. He is chiefly remembered today for his Lithuanian stories, for his autobiography, and for the 1927 silent films Sunrise, based on his short story Die Reise nach Tilsit, from the Collection Litauische Geschichten (Lithuanian Stories), and Flesh and the Devil, starring Greta Garbo, based on his play The Undying Past.
Show more
add to favoritesadd In favorites 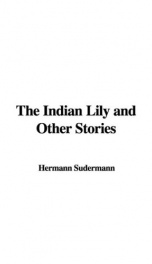 The Indian Lily and Other Stories Series: Unknown Year: Unknown Raiting: 3.5/5 TRANSLATED BY LUDWIG LEWISOHN M.A. --This text refers to the Paperback edition. Show more
add to favoritesadd In favorites

Dame Care Series: Unknown Year: Unknown Raiting: 2.5/5 Hermann Sudermann was a German playwright and novelist. After working as a journalist and editor he devoted himself to writing, starting with a collection of naturalistic short stories called ‘Im Zwielicht’ (‘At Twilight’). His novels, ‘Frau Sorge’ (‘Dame Care’), ‘Geschwister’ (‘Siblings’) didn’t bring the young author as much recognition as his first drama ‘Die Ehre’ (‘Honour’), which initiated a new period in the history of the German theatre. Another successful drama, ‘Heimat’ (‘Homeland’), was translated into English as ‘Magda’, and best actresses featured in this play. Throughout the 20th century, Sudermann’s plays have been the basis of more than thirty films. “Dame Care’ is a piece of classic literature that is definitely worth reading. Show more
add to favoritesadd In favorites