The Rev. Archibald Henry Sayce (25 September 1846 - 4 February 1933), was a pioneer British Assyriologist and linguist, who held a chair as Professor of Assyriology at the University of Oxford from 1891 to 1919. Archibald Sayce was born in Shirehampton, Bristol, to a family of Shropshire descent. A delicate child who suffered from tuberculosis and got a late start, he soon caught up with a private tutor and was reading Homer in Greek at ten. He attended Queens College, Oxford, becoming a fellow in 1869. In 1874 Sayce published a long paper, "The Astronomy and Astrology of the Babylonians" in Transactions of the Society of Biblical Archaeology vol. 3, part 1), with transcriptions and translations of the relevant cuneiform texts, that was one of the first articles to recognise and translate astronomical cuneiform texts. In 1879 Rev. Sayce linked the reliefs near Magnesia on the Maeander in western Anatolia to those of the site at Yazilikaya in the Turkish plateau, and recognised that they belonged to an unidentified pre-Greek culture. In 1876, he deciphered one of the hieroglyphics inscribed on stones at Hamath in Syria, by deducing that the profile of a man stood for "I". In 1880, he deciphered another hieroglyphic which he recognized as the governing prefix that identified divinity. He had suspected for some time that Boghazkoy was the capital of the Hittites because some hieroglyphic scripts found at Aleppo and Hamath in northern Syria were matched the script on a monument at Boghazkoy. In 1882, in a lecture to the Society of Biblical Archaeology in London, he announced that the Hittites, far from being a small Canaanite tribe who dealt with the kings of the northern kingdom of Israel, were the people of a "lost Hittite empire," which Egyptian texts were then bringing to light. He and William Wright identified the ruins at Boghazkoy with Hattusa, the capital of a Hittite Empire that stretched from the Aegean Sea to the banks of the Euphrates, centuries before the age of the Old Testament patriarchs[1]. Sayce concluded that the Hittite hieroglyphic system was predominantly a syllabary, that is, its symbols stood for a phonetic syllable. There were too many different signs for a system that was alphabetical and yet there were too few for it to be a set of ideographs. That very sign standing for the divinity had appeared on the stones of Hamath and other places, always in the form of a prefix of an indecipherable group of hieroglyphics naming the deities. This led Sayce to conclude that by finding the name of one of these deities with the help of another language endowed with similar pronunciation, one might analyze the conversion of the aforesaid name in Hittite hieroglyphics. Also, he stated that the keys to be obtained through that process might in turn be applied to other parts of a Hittite inscription where the same sign were to occur. Sayce dreamed of finding a bilingual Rosetta Stone. In 1880, he found a clue on a writing that spoke of an ancient silver disk discovered in Istanbul. It was a small-sized relic resembling a seal. In its centre, the figure of a warrior wearing a short robe, cape, helmet and upward-toe-capped boots (a Hittite apparel, no doubt) lay. The frieze around the warrior contained a cuneiform inscription in Hurrita dialect. Sayce supposed that the cuneiform inscription on the seal and the Hittite characters contained in its inner circle expressed one only meaning. Therefore, he was facing a bilingual text. Working with a plaster impression, Sayce translated the cuneiform text of a seal "Tarritktimme, king of the country of Erme" (Walters Gallery, Baltimore). By late 1886, only seven signs had been deciphered out of the totality of signs belonging to the hieroglyphic system. Later, after Sayce had turned his attention to Egyptology, archives were discovered at Hattusa that unlocked the language spoken there. Lectures were his favourite vehicle for publication. He published in 1887 his Hibbert lectures on Babylonian religion; in 1902 his Gifford lectures on Egyptian and Babylonian religion; and in 1907 his Rhind lectures. Rev. Sayce was working at El Kab in Egypt with Somers Clarke in the 1900s. In his seasonal winter digs in Egypt he always hired a well-furnished boat on the Nile to accommodate his travelling library, which also enabled him to offer tea to visiting Egyptologists like the young American James Henry Breasted and his wife. He also contributed important articles to the 9th, 10th and 11th editions of the Encyclopædia Britannica.
Show more
add to favoritesadd In favorites 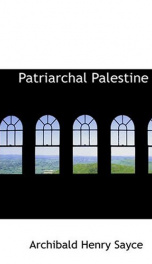 Patriarchal Palestine Series: Unknown Year: Unknown Raiting: 2.5/5 The Rev. Archibald Henry Sayce was a pioneer British Assyriologist and linguist, who held a chair as Professor of Assyriology at the University of Oxford from 1891 to 1919. He wrote a great amount of books, and 'Patriarchal Palestine' is one of the most famous. Excerpt from the book: 'Throughout I have assumed that in the narrative of the Pentateuch we have history and not fiction. Indeed the archaeologist cannot do otherwise. Monumental research is making it clearer every day that the scepticism of the so called 'higher criticism' is not justified in fact. Those who would examine the proofs of this must turn to my book on 'The Higher Criticism' and the 'Verdict of the Monuments'. There I have written purely as an archaeologist, who belongs to no theological school, and consequently readers of the work must see init merely the irreducible minimum of confidence in the historical trustworthiness of the Old Testament, with which oriental archaeology can be satisfied'. Show more
add to favoritesadd In favorites

Babylonians and Assyrians, Life and Customs Series: Unknown Year: Unknown Raiting: 3/5 This Elibron Classics book is a facsimile reprint of a 1900 edition by Charles Scribner's Sons, New York. --This text refers to an alternate Paperback edition. Show more
add to favoritesadd In favorites