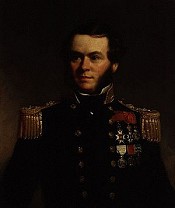 Sherard Osborn (25 April 1822 – 6 May 1875), was an Royal Navy admiral and Arctic explorer. Born in Madras, he was the son of an Indian army officer. Osborn entered the navy as a first-class volunteer in 1837, serving until 1844 in Hyacinth, Clio & Volage.[1] In 1838, he was entrusted with the command of a gunboat at the attack on Kedah in the Malay Peninsula, and was present at the reduction of Canton in 1841 and at the capture of the batteries of Woosung in 1842. From 1844 until 1848, he was gunnery mate and lieutenant in HMS Collingwood, the flag-ship of Sir George Seymour in the Pacific.[1] He took a prominent part in 1849 in advocating a new search expedition for Sir John Franklin, and in 1850 was appointed to the command of the steam-tender Pioneer in the Arctic expedition under Horatio Thomas Austin, in the course of which he performed (1851) a remarkable sledge-journey to the western extremity of Prince of Wales Island.[2] He published an account of this voyage, entitled Stray Leaves from an Arctic Journal (1852), and was promoted to the rank of commander shortly afterwards. In January 1852 he married Helen, daughter of John Hinksman of Queen Anne Street, London.[1] In the new expedition (1852-1854) under Sir Edward Belcher he again took part as commander of Pioneer. In 1856, he published the journals of Captain Robert McClure, giving a narrative of the discovery of the Northwest Passage. Early in 1855, he was called to active service in the Crimean War as the captain of Vesuvius. After seeing considerable action in the Black Sea he was promoted to post-rank in August 1855 and was appointed to Medusa, in which he commanded the Sea of Azov squadron until the end of the war. For these services he was appointed a Companion in the Order of the Bath (CB), Légion d'honneur (4th class),[3] and the Turkish Order of the Medjidie (4th class).[4] As captain of Furious, he took a prominent part in the operations of the Second Opium War, and performed a piece of difficult and intricate navigation in taking his ship up the Yangtse to Hankow (1858). He returned to England in broken health in 1859, and at this time contributed a number of articles on naval and Chinese topics to Blackwood's Magazine, and wrote The Career, Last Voyage and Fate of Sir John Franklin (1860). In 1861, he commanded Donegal in the Gulf of Mexico during the trouble there, and, in 1862, undertook the command of a squadron (the so-called "Vampire Fleet") fitted out by the Chinese government for the suppression of piracy on the coast of China; but owing to the non-fulfilment of the condition that he should receive orders from the imperial government only, he threw up the appointment. In 1864, he was appointed to the command of Royal Sovereign, the first British turret-armed battleship, in order to test the turret system of shipbuilding. In 1865, he became agent to the Great Indian Peninsula Railway Company, and two years later managing director of the Telegraph Construction and Maintenance Company. From 1869 he was a Director of the International Mid-Channel Telegraph Co. Ltd.[1] In 1871 he was appointed as captain of Hercules in the Channel Fleet. On 12 June 1873 he was appointed Rear Admiral.[5] His interest in Arctic exploration had never ceased, and in 1873 he induced Commander Albert Markham to undertake a summer voyage for the purpose of testing the conditions of ice-navigation with the aid of steam. The result of this summer voyage was the British Arctic Expedition, under Sir George Nares. Osborn became a member of the expedition committee. He died in London[1] on 6 May 1875 a few days after the expedition had sailed. Coppermine Expedition of 1819–1822 · Franklin's lost expedition · British Arctic Expedition Pelham Aldrich · Horatio Thomas Austin · George Back · Frederick William Beechey · Edward Belcher · Richard Collinson · Francis Crozier · David Buchan · John Franklin · Henry Parkyns Hoppner · Edward Augustus Inglefield · Henry Kellett · Skeffington Lutwidge · George Francis Lyon · Albert Hastings Markham · Francis Leopold McClintock · Robert McClure · George Nares · Erasmus Ommanney · Sherard Osborn · William Edward Parry · Constantine Phipps, 2nd Baron Mulgrave · James Clark Ross · John Ross · Henry Frederick Stephenson Alert · Assistance · Blossom · Carcass · Discovery · Enterprise · Erebus · Fury · Griper · Hecla · Herald · Intrepid · Investigator · Pioneer · Plover · Racehorse · Resolute · Terror
Show more
add to favoritesadd In favorites 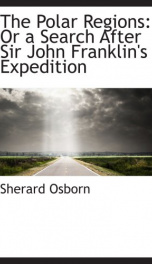 quedah a cruise in japanese waters the fight on the peiho Series: Unknown Year: Unknown Raiting: 5/5 Show more
add to favoritesadd In favorites

quedah a cruise in japanese waters the fight on the peiho Series: Unknown Year: Unknown Raiting: 5/5 Show more
add to favoritesadd In favorites 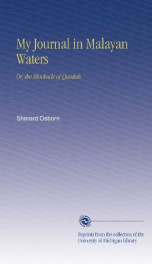 my journal in malayan waters or the blockade of quedah Series: Unknown Year: Unknown Raiting: 5/5 This volume is produced from digital images created through the University of Michigan University Library's preservation reformatting program. The Library seeks to preserve the intellectual content of items in a manner that facilitates and promotes a variety of uses. The digital reformatting process results in an electronic version of the text that can both be accessed online and used to create new print copies. This book and thousands of others can be found in the digital collections of the University of Michigan Library. The University Library also understands and values the utility of print, and makes reprints available through its Scholarly Publishing Office. Show more
add to favoritesadd In favorites

Stray Leaves from an Arctic Journal; Series: Unknown Year: Unknown Raiting: 4/5 This book was converted from its physical edition to the digital format by a community of volunteers. You may find it for free on the web. Purchase of the Kindle edition includes wireless delivery. Show more
add to favoritesadd In favorites