Lawrence Gilman (July 5, 1878 in Flushing, New York – September 8, 1939 in Sugar Hill, New Hampshire) was a U.S. author and music critic. Lawrence Gilman was the son of Arthur Coit Gilman and Bessie (Lawrence) Gilman. He studied art at Collins Street Classical School in Hartford, Connecticut under William M. Chase. He also taught himself music in theory and practice on several instruments, including organ and piano. From 1896 to 1898, he worked for the New York Herald, then from 1901 to 1913 as a music critic for Harper's Weekly, where he advanced to the position of managing editor. From 1915 to 1923, he worked as a critic in multiple arts for the North American Review, and for the Herald Tribune from 1925 on. On August 1, 1904, he married Elizabeth Wright Walter, with whom he had one child, "Betty" Elizabeth Lawrence Gilman in 1905. Gilman wrote several books: He also wrote musical works:
Show more
add to favoritesadd In favorites 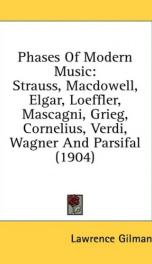 phases of modern music Series: Unknown Year: Unknown Raiting: 4.5/5 PHASES OF MODERN MUSIC STRAUSS MAC DOWELL ELGAR LOEFFLER MASCAGNI-GRIEG-CORNELIUS-VERDI WAGNER PARSIFAL AND ITS SIGNIFICANCE BY LAWRENCE OILMAN 41 So the music of the world flies away from us as we watch the burning out of the sun. Like bird after bird its newness flies from us, and finds separate resting houses here and there in the places of the past. We who live and observe whither it has ftown have also the privi lege of noting the flight of the celestial bird as it leaves our shores this day for the South that lies behind us. VERNON BLACKBURN. NEW YORK AND LONDON HARPER BROTHERS PUBLISHERS Copyright, 1904, by HARPER BROTHERS. All rights reserved. Published November, 1904. TO PHILIP HALE WHO IS AMONG THE FOREMOST OF THOSE WHO HAVE MADE MUSICAL CRITICISM IN AMERICA HONORABLE AND IMPORTANT, AND WHOSE WORK CANNOT BUT BE A STIMULUS TO ANY ONE WHO TO DAY IS STRIVING TO WRITE SINCERELY. JUSTLY, AND INDEPENDENTLY UPON THE SUBTLEST OF THE ARTS NOTE OF the twelve papers in this volume, those on MacDowell, Mascagni, and Par sifal, were published originally in The North American Review the article on Richard Strauss appeared in The Critic, and that on The Question of Realism in The Musical Record. The papers on Elgar, Cornelius, and De Laras Messa line were printed first in The Musical World, and the comparative study of Verdi and Wagner and the appreciation of Mr. Loeffler in The Musician. The note on Grieg and the essay on Woman and Modern Music appeared, respec tively, in Harpers Weekly and Harpers v NOTE Bazar, the latter In somewhat different form and under another title. I take pleasure in acknowledging the courtesy of the editors of these period icals in permitting me to republish the articles, all of which have been variously altered and amplified. L. G. CONTENTS PAGE THB ACHIEVEMENT OF RICHARD STRAUSS 3 AN AMERICAN TONE-POET .... 26 CONCERNING EDWARD ELGAR. ... 46 CHARLES MARTIN LOEFFLER .... 61 PIETRO MASCAGNI 72 A NOTE ON GRIEG 88 WOMEN AND MODERN Music .... 93 A REJECTED MUSIC-DRAMA .... 102 THE QUESTION OF REALISM .... 109 A NEGLECTED SONG WRITER . . . 121 VERDI AND WAGNER AN INQUIRY . . 130 PARSIFAL AND ITS SIGNIFICANCE . 153 PHASES OF MODERN MUSIC --This text refers to an alternate Paperback edition. Show more
add to favoritesadd In favorites 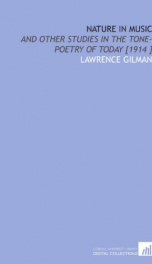 nature in music and other studies in the tone poetry of today Series: Unknown Year: Unknown Raiting: 4.5/5 Originally published in 1914. This volume from the Cornell University Library's print collections was scanned on an APT BookScan and converted to JPG 2000 format by Kirtas Technologies. All titles scanned cover to cover and pages may include marks notations and other marginalia present in the original volume. Show more
add to favoritesadd In favorites 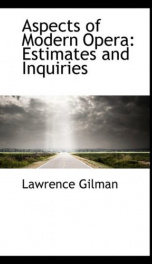 aspects of modern opera estimates and inquiries Series: Unknown Year: Unknown Raiting: 3/5 Discusses the contributions of Wagner, Puccini, Straus, Debussy, et al., to the evolution of opera as a musical art form.THIS TITLE IS CITED AND RECOMMENDED BY: Books for College Libraries; Catalogue of the Lamont Library, Harvard College. --This text refers to the Hardcover edition. Show more
add to favoritesadd In favorites

Edward MacDowell Series: Unknown Year: Unknown Raiting: 4/5 Purchase of this book includes free trial access to www.million-books.com where you can read more than a million books for free. This is an OCR edition with typos. Excerpt from book: THE MUSIC-MAKER CHAPTER III HIS ART AND ITS METHODS Among those music-makers of to-day who are both pre-eminent and representative the note of sincere romance is infrequently sounded. The fact must be obvious to the most casual observer of musical art in its contemporary development. The significant work of the most considerable musicians of our time  of Strauss, Debussy, Loeffler, dTndy  has few essentially romantic characteristics. It is necessary to distinguish between that fatuous Romanticism of which Mr. Ernest Newman has given an unequalled definition: the Romanticism which expended itself in the fabrication of a pasteboard world of "gloomy forests, enchanted castles, impossible maidens, and the obsolete profession of magic," and that other and imperishable Spirit of Romance whose infrequent embodiment in modern music I have remarked. That is a romance in no wise divorced from reality  is, in fact, but reality diviningly perceived; if it uses the old Romanti- cistic properties, it uses them not because of any inherent validity which they possess, but because they may at times be made to serve as symbols. It deals in a truth that is no less authentic because it is conveyed in terms of a beauty that may often be in the last degree incalculable and aerial. It is to its persistent embodiment of this valid spirit of romance that MacDowell's work owes its final and particular distinction. I know of no composer who has displayed a like sensitiveness to the finer stuff of romance. He has chosen more than occasionally to employ, in the accomplishment of his purposes, what seems at first to be precisely the magical apparatus so necessary to the older Romanticism. Dryads and elves are his intimate companions, and he dwells at times under fairy boughs and in enchanted woo... --This text refers to an alternate Paperback edition. Show more
add to favoritesadd In favorites