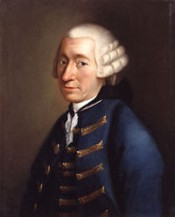 Tobias George Smollett (19 March 1721 – 17 September 1771) was a Scottish poet and author. He was best known for his picaresque novels, such as The Adventures of Roderick Random (1748) and The Adventures of Peregrine Pickle (1751), which influenced later novelists such as Charles Dickens. Smollett was born at Dalquhurn, now part of Renton, in present-day West Dunbartonshire, Scotland. He was the son of a judge and land-owner, and was educated at the University of Glasgow, qualifying as a surgeon. His career in medicine came second to his literary ambitions, and in 1739 he went to London to seek his fortune as a dramatist. Unsuccessful, he obtained a commission as a naval surgeon on HMS Chichester and travelled to Jamaica, where he settled down for several years. in 1742 he served as a surgeon during the disastrous campaign to capture Cartagena. On his return, he set up practice in Downing Street and married a wealthy Jamaican heiress, Anne Lascelles, in 1747. His first published work was a poem about the Battle of Culloden entitled "The Tears of Scotland", but it was The Adventures of Roderick Random which made his name. It was modelled on Le Sage's Gil Blas, and was published in 1748. Smollett followed it up by finally getting his tragedy, The Regicide, published, though it was never performed. In 1750, Smollett took his MD degree in Aberdeen, and also travelled to France, where he obtained material for his second novel, The Adventures of Peregrine Pickle, another big success. Having lived for a short time in Bath, he returned to London and published The Adventures of Ferdinand Count Fathom in 1753. He was now recognised as a leading literary figure, and associated with the likes of David Garrick, Laurence Sterne, Oliver Goldsmith and Samuel Johnson, whom he famously nicknamed "that Great Cham of literature".[1] In 1755 he published a translation of Miguel de Cervantes's Don Quixote, which he revised in 1761. In 1756, he became editor of The Critical Review. Smollett then began what he regarded as his major work, A Complete History of England, which took from 1757 to 1765. During this period he served a short prison sentence for libel, and produced another novel, The Life and Adventures of Sir Launcelot Greaves (1760). Having suffered the loss of a daughter, he went abroad with his wife, and the result was Travels through France and Italy (1766). He also wrote The History and Adventures of an Atom (1769), which give his view of British politics during the Seven Years' War under the guise of a tale from ancient Japan. He also visited Scotland, and this visit helped inspire his last novel, The Expedition of Humphry Clinker (1771), published in the year of his death. He had for some time been ailing from an intestinal disorder, and had sought a cure at Bath and eventually retired to Italy, where he is buried at Leghorn (Livorno). There is a monument to his memory beside Renton Primary School, Dunbartonshire, Scotland, on which there is a Latin inscription composed by Dr. Johnson. The area around the monument was improved in 2002, with an explanatory plaque. Each year links to its corresponding "[year] in literature" or "[year] in poetry":
Show more
add to favoritesadd In favorites

The History of England in Three Volumes,Vol.III. From the Accession of George III. to the Twenty-Third Year of the Reign of Queen Victoria Series: Unknown Year: Unknown Raiting: 5/5 Show more
add to favoritesadd In favorites

The History of England in Three Volumes,Vol.III. From the Accession of George III. to the Twenty-Third Year of the Reign of Queen Victoria Series: Unknown Year: Unknown Raiting: 5/5 Show more
add to favoritesadd In favorites

The History of England in Three Volumes, Vol.III. Series: Unknown Year: Unknown Raiting: 5/5 This book was converted from its physical edition to the digital format by a community of volunteers. You may find it for free on the web. Purchase of the Kindle edition includes wireless delivery. Show more
add to favoritesadd In favorites