Berthold Auerbach (February 28, 1812 – February 8, 1882) was a German-Jewish poet and author. Moses (Moyses) Baruch Auerbach was born in Nordstetten (now Horb am Neckar) in the Kingdom of Württemberg. On the completion of his studies at the universities of Tübingen, Munich and Heidelberg, he immediately devoted himself to literature. His first publication dealt with "Judaism and Recent Literature", and was to be followed by a series of novels taken from Jewish history. Of this intended series he actually published, with considerable success, "Spinoza" and "Poet and Merchant." But real fame and popularity came to him when he began to occupy himself with the life of the general people which forms the subject of his best-known works. In these later books, of which "On the Height" is perhaps the most characteristic and certainly the most famous, he revealed an unrivalled insight into the soul of the Southern German country folk, and especially of the peasants of the Black Forest and the Bavarian Alps. His descriptions are remarkable for their fresh realism, graceful style and humour. In addition to these qualities, his last books are marked by great subtlety of psychological analysis. "On the Height" was first published at Stuttgart in 1861, and has been translated into several languages. Auerbach died at Cannes shortly before his 70th birthday.
Show more
add to favoritesadd In favorites 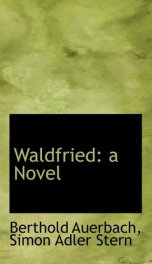 waldfried a novel Series: Unknown Year: Unknown Raiting: 4/5 Many of the earliest books, particularly those dating back to the 1900s and before, are now extremely scarce and increasingly expensive. We are republishing these classic works in affordable, high quality, modern editions, using the original text and artwork. --This text refers to an alternate Paperback edition. Show more
add to favoritesadd In favorites

spinoza a novel Series: Unknown Year: Unknown Raiting: 4.5/5 Purchase of this book includes free trial access to www.million-books.com where you can read more than a million books for free. This is an OCR edition with typos. Excerpt from book: CHAPTER III. THE JEWISH DOMINICAN. RODRIGO CASSERES took another long draught from his tall goblet, and began his narration: "About eight months ago I received a letter from Seville through Philip Capsoli; I was horrified when I read the address, ' To Daniel Casseres in Guadalaxara.' It could only be some thoughtless Jew who would address me by my Hebrew name. How I trembled at the contents ! ' Daniel, Man of Pleasure,' it said, ' the day of vengeance and death is at hand, and I must die among the Philistines. Would you ask how it feels to be roasted ? Come to me; I am watched by the holy police. In the name of the High God, by the ashes of our murdered brothers and sisters, I conjure you come to thy dying Geronimo de Espinosa.' There could be no doubt that Geronimo himself had written the letter; the fine straight line under the signature, a sign of the worship of the one true God, showed me that plainly, even if I had failed to recognize the trembling handwriting. "When I told my children of my intention totravel to Seville, I was weak enough to be deterred from its fulfilment by their prayers and tears. I had almost forgotten poor Geronimo, when a dreadful dream reminded me of him, and the next day I set out on my journey. " I parted from my children with a beating heart, telling them I was going to my sister in Cordova. I travelled swiftly through Cordova, and passed my sister's house unnoticed; I could neither stop nor rest; it was as if an unseen hand drew me irresistibly onward. I arrived at Seville. The clock struck the hour as I mounted the hill. 'There you dwell, my brilliant Geronimo,' I said to myself, 'and turn your footsteps to the Chapel, with prayer on your lips and scorn in your heart. Is it not a tempting of Providence for you, at heart a Jew, to v... --This text refers to the Paperback edition. Show more
add to favoritesadd In favorites

on the heights a novel Series: Unknown Year: Unknown Raiting: 2.5/5 Purchase of this book includes free trial access to www.million-books.com where you can read more than a million books for free. This is an OCR edition with typos. Excerpt from book: FOURTH CHAPTER. The young court physician, Sixtus, drove in the open carriage to the mountains. He was a man of agreeable worldly manners; he had accompanied the present king, while he was still crown prince, on his travels; and in the company of the nobles he had increased the easy tone, which he had acquired by a three years' residence in Paris. As princes order their inferiors, and turn service into an obligation, it readily happens that persons in office at court are often hard in reproof upon those inferior to themselves. The court physician had selected a servant whom he knew to be most officious. "A light, Baum," he called out; and the servant at once held out to him a lighted match from the box where he was sitting beside the coachman. With courteous condescension Sixtus handed him his cigar-case; the servant, thanking him, took out a cigar. The court physician's cigars were indeed too strong for him, and threw him into a cold perspiration whenever he smoked them; but it is a wise rule not to reject a proffered favour. It was an easy drive along the good road. At the first post-stage the royal horses were sent back, and they continued the journey with extra post horses. The court physician had nothing of all this to arrange for himself. Baum knew and took care of everything. "Baum, where did you come from?" asked the rart physician, as they drove on. Baum started, but he did not turn round; he behaved as if he had not heard the question; he wanted to compose himself before he could reply: his features twitched, but he knew how to resume at once a modest and innocent expression. The physician inquired again, "Baum, where were you born?" A respectful face turned round. "I am from the mountain, out there, far behind on the frontier; but I have never... --This text refers to the Paperback edition. Show more
add to favoritesadd In favorites 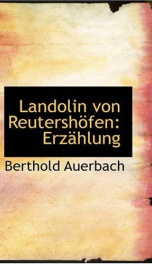 landolin Series: Unknown Year: Unknown Raiting: 4/5 Purchase of this book includes free trial access to www.million-books.com where you can read more than a million books for free. This is an OCR edition with typos. Excerpt from book: CHAPTER III. /"TH'ERE, where the bright morning light JL streamed through many windows, and the ever-heated porcelain stove spread a pleasant warmth, the farmer was walking up and down. He was a broad, stately man; his thick hair was cut short, and the stubble stood upright, which gave his immense head a certain bull-dog look. From his smoothly-shaven face looked forth self- esteem, obstinacy, and contempt of the world. He was still in his shirt sleeves, but otherwise arrayed in holiday attire; the single-breasted, col- larless, velvet coat alone hung on the nail; he wore high boots, whose tops fell down in folds, showing the white stockings below the knee- breeches ; and also a gay silk vest, buttoned close to his throat. As his wife entered he nodded silently. Following her came their son Peter, a discontented-looking, full-faced young fellow, and then the servant- men and maids. After grace was said, they sat down to breakfast. There was no conversation; no one even spoke of the chair that remained vacant, that of Thoma. Not until the after-grace had been said, did the peasant speak to Tobias, telling him to take the fat oxen to the fair. He then sat down in the great arm-chair, not far from the stove, and looked toward the door. Thoma may be permitted to make an exception to-day. Usually she takes great pride in allowing no one to be before her at work, early or late. Suddenly he arose, and stepping to the porch that led to the yard, called to Tobias to take the prize cow also to the fair. " Father," called a strong girlish voice from the chamber window over the door, " Father, do you mean to sell the prize cow too? " Landolin half-turned his head, and looked toward the window, but seemed to think a reply unnecessary. He called to the servant not to forget t... Show more
add to favoritesadd In favorites