reveries of a schoolmaster 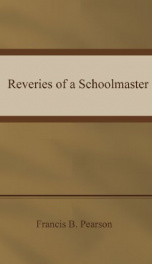 IN MEDIAS RESI am rather glad now that I took a little dip (one could scarce callit a baptism) into the Latin, and especially into Horace, for thatgood soul gave me the expression _in medias res_. That is a forcefulexpression, right to the heart of things, and applies equally well tothe writing of a composition or the eating of a watermelon. Thosewho have crossed the Channel, from Folkstone to Boulogne, know thatthe stanch little ship _Invicta_ had scarcely left dock when theywere _in medias res_. They were conscious of it, too, if indeed theywere conscious of anything not strictly personal to themselves. Thisexpression admits us at once to the light and warmth (if such therebe) of the inner temple nor keeps us shivering out in the vestibule.Writers of biography are wont to keep us waiting too long forhappenings that are really worth our while. They tell us that someone was born at such a time, as if that were really important. Why,anybody can be born, but it requires some years to determine whetherhis being born was a matter of importance either to himself or toothers. When I write my biographical sketch of William Shakespeare Ishall say that in a certain year he wrote "Hamlet," which factclearly justified his being born so many years earlier.The good old lady said of her pastor: "He enters the pulpit, takeshis text, and then the dear man just goes everywhere preaching theGospel." That man had a special aptitude for the _in medias res_method of procedure. Many children in school who are not versed inLatin would be glad to have their teachers endowed with thisaptitude. They are impatient of preliminaries, both in the schooland at the dinner-table. And it is pretty difficult to discover justwhere childhood leaves off in this respect.So I am grateful to Horace for the expression. Having started rightin the midst of things, one can never get off the subject, and thatis a great comfort. Sometimes college graduates confess (or perhapsboast) that they have forgotten their Latin. I fear to follow theirexample lest my neighbor, who often drops in for a friendly chat,might get to wondering whether I have not also forgotten much of theEnglish I am supposed to have acquired in college. He might regardmy English as quite as feeble when compared with Shakespeare orMilton as my Latin when compared with Cicero or Virgil. So I takecounsel with prudence and keep silent on the subject of Latin.When I am taking a stroll in the woods, as I delight to do in theautumn-time, laundering my soul with the gorgeous colors, the musicof the rustling leaves, the majestic silences, and the sounds thatare less and more than sounds, I often wonder, when I take onebypath, what experiences I might have had if I had taken the other.I'll never know, of course, but I keep on wondering. So it is withthis Latin. I wonder how much worse matters could or would have beenif I had never studied it at all. As the old man said to the youngfellow who consulted him as to getting married: "You'll be sorry ifyou do, and sorry if you don't." I used to feel a sort of pity formy pupils to think how they would have had no education at all ifthey had not had me as their teacher; now I am beginning to wonderhow much further along they might have been if they had had someother teacher. But probably most of the misfits in life are in theimagination, after all. We all think the huckleberries are moreabundant on the other bush.
Show more
add to favoritesadd In favorites

reveries of a schoolmaster 4.5/5

reveries of a schoolmaster 4.5/5