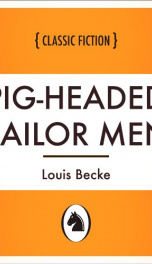 Crossing from Holyhead to Ireland one night the captain of the steamerand myself, during an hour's talk on the bridge, found that we each hadsailed in a certain Australian coasting steamer more than twenty yearsbefore--he as chief officer and I as passenger; and her shipwreck oneChristmas Eye (long after), which was attended by an appalling loss oflife, led us to talk of "pig-headed" skippers generally. His experienceswere large, and some of his stories were terrible even to hear, otherswere grotesquely humorous, and the memory of that particularly pleasantpassage across a sea as smooth as a mill pond, has impelled me toretell some of the incidents I related to him of my own adventures withobstinate, self-willed, or incapable captains.
Show more
add to favoritesadd In favorites

The Brothers-In-Law: A Tale Of The Equatorial Islands; and The Brass Gun Of The Buccaneers1901 5/5

The Strange Adventure Of James Shervinton1902 4.5/5

"Pig-Headed" Sailor Men From "The Strange Adventure Of James Shervinton and Other Stories" - 1902 2.5/5

Âmona; The Child; And The Beast; And OthersFrom "The Strange Adventure Of James Shervinton and OtherStories" - 1902 4/5

The South SeamanAn Incident In The Sea Story Of Australia - 1901 3.5/5
Show more