on the development and transmission of power from central stations 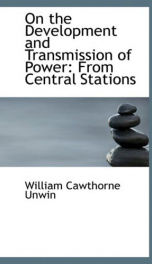 PREFACE. THE present Treatise is based on the Course of Lectures which the Council of the Society of Arts requested the Author to deliver in January and February 1893. In republishing thein under less stringent limitations of time and space many gaps have been filled up and some questions have been discussed more fully. The importance of the problem of distributing power to many consumers can hardly be overrated. In dealing with it the question of cost cannot be put on one side. The financial conditions are governing conditions, and must be considered together with the mechanical conditions. An attempt has been made in the present treatise to treat the subject as a whole. Hence the canses of waste in generating power have been discussed as well as the losses in distribution. The subject is so wide and touches so many departments of engineering that it is too much to hope that all the questions involved have been examined with sufficiently adequate knowledge. But much care has been taken to indicate what is essential in the consideration of schemes of power distribution, whatever the source from which the power is obtained and whatever the method of transmission adopted. For the rest, practical experience will gradually determine much that is at present doubtful. Tliomas Howard left a bequest to the Society of Arts, to provide for the delivel y, periodically, of courses of lectures relating to the production and use of motive power. In carrying out the duty imposed by this trust, the Society did the author the hoiiour of inviting him to give some lectures on the development of power at Central Stations, and its distribution, either as motive power for driving factories and workshops, or as energy applied to other purposes. Energy is in these lectures to be considered as a commodity, which can be manufacturecl in a convenient form, and distributed and solcl. The special problems to be dealt with are the conditions which favour tlle production of a convenient form of eneiagy, on a large scale and in the most ecoilomical wpy the means of conveying it to a distance and distributing i t t o consumers the arrangements for measuring the quantity delivered and lastfly, the relative advantages and disadvantages of a system in which energy is obtained on a large scale and distributed to many consumers, compared with a system in which each consumei produces tlle power he requires in his own locality ancl under his own supervision and responsibility. As various sources of energy are available, and as there are - several rnethods of distributing energy or means of readily obtaining energy, the inquiry is a wide one. I t may be limited B 2 I ISTRIBUTION OF POWER at once to those cases in which the final form of energy required is mechanical energy. Pressure water is a convenient source of mechanical energy, so that a water-supply system with it8 pnlnping station and distributing mains is from one point of view a central station from which energy is distributed. Bnt water-pressure systems need only be considered in these lectures SO far as they are actually used for distributing motive power. A11 electric lighting station is a central station distributing energy to many consumers... --This text refers to an alternate Paperback edition.
Show more
add to favoritesadd In favorites

if you like on the development and transmission of power from central stations try:

The Elements of Machine Design 3.5/5

The Testing of Materials of Construction: A Text-book for the Engineering ... 2.5/5

The Elements of Machine Design 3/5

The Elements of Machine Design 4/5

The elements of machine design 4.5/5

the elements of machine design volume 2 3/5

the elements of machine design volume 1 4/5 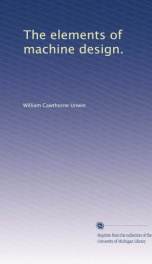 the elements of machine design 4.5/5

if you like on the development and transmission of power from central stations try:

The Elements of Machine Design 3.5/5

The Testing of Materials of Construction: A Text-book for the Engineering ... 2.5/5
Show more