Originally published in 1899 as a revision and addition to a work published in 1868. Contents includes: Effects of the Renaissance Renaissance Tendencies Sturmius (1507-1589) Schools of the Jesuits Rabelais (1483-1553) Montaigne (1533-1592) Ascham (1515-1568) Mulcaster (1531-1611) Ratichius (1571-1635) Comenius (1592-1671) The Gentlemen of Port-Royal Some English Writers before Locke Locke (1632-1704) Jean-Jacques Rousseau (1712-1778) Basedow and the Philanthropinum Pestalozzi (1746-1827) Friedrich Froebel (1783-1852) Jacotot, a Methodizer (1770-1840) Herbert Spencer Thoughts and Suggestions The Schoolmaster's Moral and Religious Influence Conclusion. "The history of education, much as it has been hitherto neglected, especially in England, must have a great future before it. If we ignore the past we can not understand the present, or forecast the future. In this book I am going to speak of reformers or innovators who aimed at changing what was handed down to them; but the radical can no more escape from the past, than the conservative can stereotype it. It acts not by attraction only, but no less by repulsion. There have been thinkers in later times who have announced themselves as the executioners of the past and laboured to destroy all it has bequeathed to us."
Show more
add to favoritesadd In favorites 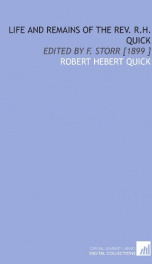 life and remains of the rev r h quick 4/5 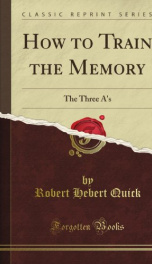 how to train the memory the three as 5/5