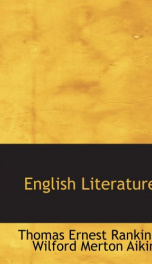 Purchase of this book includes free trial access to www.million-books.com where you can read more than a million books for free. This is an OCR edition with typos. Excerpt from book: CHAPTER II ANGLO-SAXON AND MIDDLE-ENGLISH LITERATURE 600-1154 I. Anglo-saxon Who the Anglo-Saxons were. â The earliest human inhabitants of the British Isles appear to have been cave dwellers and men much like the Eskimos of Greenland. Then came the Iberians, among the descendants of whom are, perhaps, the Basques of northern Spain. A third race to dwell in those islands was the Celts, who probably gave the name Albion to what we now know as England, though it is not impossible that Albion may be an Iberian name. The first Celts to come from the continent were Goidels (or Gaels), and a later swarm were Britons. It is from this second group of Celts that the name Britain is derived. Gauls, Belgians, and Romans also came before the beginning of the Christian era. It was only the Romans who conquered a great part of the islands. They came first under Julius Csesar, in 55 B.c., Caesar thinking it necessary to invade Britain in order to prevent the Britons from coming to the continent in aid of their kindred whom he was subduing there. Britain remained a part of the Roman Empire until 410 A.d., over four and one half centuries, when the Romans permanently withdrew because all of Rome's soldiers were needed to keep off attacks of barbarians much nearer Rome than Britain. The Romans did much for Britain. They built fine roads, cleared marshes for tillage, opened up mines, built houses and cities, extinguished tribal antagonisms, and administered justice. As early as the fourth century B.c. the Saxons began to invade England, first as merciless pirates and later as home seekers. They appear to have come from the coast of the continent all the way from the northern part of what is now Denmark to as far south and west as into what is now the country of Holland. They brought wi... --This text refers to the Paperback edition.
Show more
add to favoritesadd In favorites