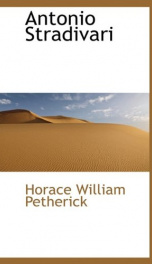 Purchase of this book includes free trial access to www.million-books.com where you can read more than a million books for free. This is an OCR edition with typos. Excerpt from book: CHAPTER IV. Lesser Known Patterns Of Stradivari  The Treatment Of The Scroll By Him, The InDividuality And Maturing Of The StyleThe Purpling. DURING the period of 169o-17oo the modification of parts of the pattern and details was slight but nevertheless important. Occasionally the upper corners drooped a little more, and when they are Tiow seen in fine preservation seem rather long in comparison with later ones, but they are not really so, it being in the expression no doubt arising from the greater robustness in the treatment of the corners which now were becoming in aspect more square, but with the usual peculiarities retained. There was also about this time another modification sent forth, a pattern that has the waist curve narrowed in a trifle at about two-thirds of the way upward, causing a slight suspicion of a wish to return to his old Nicolo Amati period, but it seems to have been only momentary, and beautiful as these violins are, they do not appear to have been repeated. They are in consequence very rare. Accompanying these little variations there was a slight change in the treatment of the scroll; it became less massive, while all the principal features of detail were retained, the grooves at the back were deepened a little as they ran down to the shell, which last was made a degree less shallow. In the earlier part of this period the general contour has a little more flow in the disposition of line, but later on this was checked, as if not meeting with the full approval of the master, whose goal of ambition was kept steadily in view from the first- that of introducing a design that should worthily rank as classical, and in its details and execution be such, that no weak spot or point of failure should be discern- able under the closest scrutiny. The soun... --This text refers to the Paperback edition.
Show more
add to favoritesadd In favorites