Purchase of this book includes free trial access to www.million-books.com where you can read more than a million books for free. This is an OCR edition with typos. Excerpt from book: CHAPTER III THE FATHER OF THE TURNPIKE AND SOME RELATED TAVERNS The first post-road to New York, over which Madam Knight travelled in 1704, went by the way of Providence, Stonington, New London and the shore of Long Island Sound, a distance of two hundred and fifty- five miles. Just eighty years after that doughty dame's journey, Captain Levi Pease put on a regular stage between Boston and Hartford and the beginning of systematic communication between Boston and New York was established. Pease was a Connecticut man (born in Enfield in 1740) but after his marriage he removed to Massachusetts, and it is with a little Massachusetts town, Shrewsbury, near Worcester, that his fame is most intimately bound up. Shrewsbury, moreover, is particularly interesting to us because, at the time Pease started his stage route, there were no less than three noted taverns in the place,  Farrar's, Baldwin's and Howe's. Farrar's Tavern is now better known as the Pease Tavern for the reason that the " Father of the Turnpike " eventually came to be its landlord. But Major John Farrar, an army officer of considerable distinction, was in charge during the Revolution and during the visit made to the village in 1789 by General Washington while on his way to Boston. For all travellers to and from the New England capital the house was a popular resort, for it stood on the corner formed by the junction of the " great road " with the road to Westboro', about one mile from the Northboro' line, right in the current of travel. Very likely, therefore, it was at this tavern that John Adams overheard in 1774 the conversation which, tavern-hater though he was, so impressed him that he set it down with scarcely concealed pleasure: " Within the course of the year, before the meeting of Congress in 1774, on ... --This text refers to an alternate Paperback edition.
Show more
add to favoritesadd In favorites

if you like among old new england inns try:

the romance of the american theatre 3.5/5

the college girl of america and the institutions which make her what she is 4.5/5

romantic days in the early republic 3.5/5

in the days of the pilgrim fathers 2.5/5 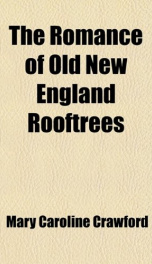 if you like among old new england inns try:

the romance of the american theatre 3.5/5

the college girl of america and the institutions which make her what she is 4.5/5
Show more