a treatise on the law of war 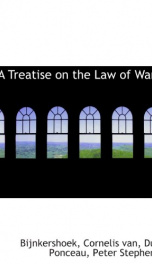 Bynkershoek, Cornelius van. Du Ponceau, Peter Stephen, Editor and Translator.A Treatise on the Law of War: Being the First Book of His Quaestiones Juris Publici. Translated From the Original Latin with Notes, by Peter Stephen du Ponceau.Philadelphia: Published by Farrand & Nicholas [et al.], 1810. xxxiv, 218 pp. Reprint available May 2008 by The Lawbook Exchange. With a new introduction by William E. Butler, John Edward Fowler Distinguished Professor of Law, Dickinson School of Law. ISBN-13: 978-1-58477-566-9. ISBN-10: 1-58477-566-1. Cloth. $95.* A title in the Lawbook Exchange series Foundations of the Laws of War, Joseph Perkovich, General Editor. A Treatise on the Law of War addresses the customs of land and sea warfare. A notably humane work, it condemns actions against civilians and advocates the fair treatment of prisoners of war. Du Ponceau's able translation is prefaced by a biography of the author, a table of cases, an index of citations from the Corpus Juris Civilis and an annotated bibliography of civil law treatises cited or referred to by the author. This latter item, which lists editions and translations, is interesting for its insights into the American reception of the civil law in the early 1800s. One of the most important jurists and international lawyers of his time, Bynkershoek [1673-1743] was an influential Dutch jurist who founded the positive school of international law, which held that usage and practice were more important than deductions drawn from natural law. Du Ponceau [1760-1844] is an important figure in the early history of American Law and letters. He founded the Law Academy of Philadelphia in 1821, was the President of the American Philosophical Society and was a much-consulted expert on international relations and linguistics. --This text refers to the Hardcover edition.
Show more
add to favoritesadd In favorites

if you like a treatise on the law of war try:

if you like a treatise on the law of war try: