a history of the roman catholic church in the united states 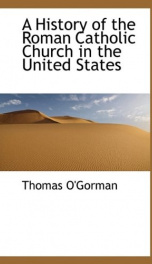 Purchase of this book includes free trial access to www.million-books.com where you can read more than a million books for free. This is an OCR edition with typos. Excerpt from book: CHAPTKR III. THE PERMANENT SETTI.EMENT OF FI.ORIDA (1565-1 762). THt'S were the Spaniards left in possession of Horida; and the possession lasted for about two hundred years, when the Knglish colonies of South Carolina and Georgia grew strong enough to oust them. Wc can give but the briefest synopsis of this long occupation. In order to understand the church's work and situation it must not be forgotten that two classes of ecclesiastics were side by side on Floridian soil. There were secular priests, directly under the jurisdiction of the Bishop of Santiago de Cuba, and later on of the Bishop of Havana. Those secular priests were stationed in St. Augustine and at the other posts held by the Spanish soldiers and settlers. There was constantly, with exceptions of vacancies between the incumbents, a parish priest with a certain number of assistants in St. Augustine, which was a regularly constituted parish ; in the other posts there were chaplains. When a vacancy occurred, generally the religious in the province acted during the interim in the stead of the secular priests, as the records abundantly show. As for the Indian missions, only regulars were employedat first Dominicans, then Jesuits, and after the two former had abandoned the field, then Franciscans, who from the year 15/7 occupied the f1eld exclusively. I shall make but occasional and brief referenre to the secular clergy and their work: for as the purely Spanish population did not take on any great expansion, neitherdid the secular clergy and its work. The glory of the Flo- ridian church is in its martyrs, its missionaries, and they were the regulars. In 1566 came some Dominicans, two of whom, with thirty soldiers, were sent to the Chesapeake. The intention of Menendez was to occupy the bay as a northern advance ... --This text refers to an alternate Paperback edition.
Show more
add to favoritesadd In favorites

if you like a history of the roman catholic church in the united states try:

if you like a history of the roman catholic church in the united states try: