a half century of naval service 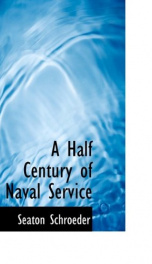 PREFACE The class of 68 in the U. S. Naval Academy entered the naval arena at a time when matters connected with the sea were on the threshold of a great development. During their span of about half a century naval weapons and methods underwent change to an extent undreamed of before. In partial illustration of this are the two photographs in this book of my first ship in 1864, the U.S.S. Macedomia, a sailing frigate that had been captured from the British in the War of 1812, and of the battleship, Cofinecticut, my flagship when in command of the Atlantic Fleet prior to going on the retired list in 1911. To take part in the successive steps of material development and keep abreast of professional. thought in the employment of the personnel and ever-changing tools to give proper training and fillip to those coming after, and to maintain their morale and spirit by example even more than by pre- cept in fine, to preserve the naval tradition,-this has been a satisfying goal for the men of that period, at least during the latter part of it and, upon laying down their beloved burden, they could do so with the pleasant thought that the great test of a war of wholly new aspect had found the fleet Salzs peur et sums reprocke and ready as far as it lay with them to make it so. Incidental have been the world-wide, varied activities of the silent navy, fostering resourcefulness and adaptability while at times interesting and useful. --This text refers to an alternate Paperback edition.
Show more
add to favoritesadd In favorites

if you like a half century of naval service try:

A Half Century of Naval Service 3.5/5

The Fall of Maximilian's Empire: As Seen from a United States Gun-boat 3.5/5

a half century of naval service 4/5

if you like a half century of naval service try:

A Half Century of Naval Service 3.5/5

The Fall of Maximilian's Empire: As Seen from a United States Gun-boat 3.5/5

a half century of naval service 4/5