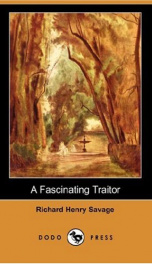 Richard Henry Savage (1846-1903) was a soldier, engineer, diplomat, lawyer, novelist, civic leader and war hero. His ancestors were English, Scottish and Irish, and his grandfather, a civil engineer, arrived in America around 1805. Savage graduated from West Point in 1868 and was commissioned a second lieutenant in the U.S. Army Corps of Engineers. He joined the Egyptian army as a major in 1871. He served on the Texas-Mexico frontier and as a chief engineer on a railroad in California, retiring in 1884. Savage wrote his first novel, My Official Wife (1891), which proved to be his most famous. He wrote over 40 books, including Our Mysterious Passenger and Other Stories (1899). Savage became senior Captain of the 27th U.S. Volunteer Infantry and was appointed Brigadier General and Chief Engineer of Spanish War Veterans in 1900. After living such an adventurous life, Savage was run over by a horse-drawn wagon while crossing Sixth Avenue in New York City.
Show more
add to favoritesadd In favorites