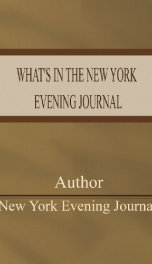 Thirty-three years ago the New York Evening Journal was introduced toNew York under its present ownership.Improvements have been constant. The aim has been to give the public abetter and still better newspaper, to make the New York Evening Journalmore attractive and interesting to every member of the family.Today, this newspaper is read by the greatest number of men and women inall income groups. It goes into the homes of the highest earning andlargest spending classes, reaching the worthwhile families of New YorkCity and its suburbs.The New York Evening Journal, through its National and InternationalNews and Feature Services, has access to more of the very best andhighest paid experts, writers, artists and contributors in everydepartment of newspaper publishing than any evening newspaper in Americaoutside the Hearst organization.For the past quarter of a century the New York Evening Journal hasattracted the largest readership of any evening newspaper in the UnitedStates on the sound principle of greatest service to the greatest numberof men and women in every substantial walk of life.Talent, the most expert and brilliant that money can attract, asexemplified throughout the pages of this booklet, gives you the secretof READER INTEREST and READER CONFIDENCE in the New York EveningJournal--an overwhelming PUBLIC PREFERENCE over one hundred per centgreater than the next largest standard size evening newspaper in NewYork City.
Show more
add to favoritesadd In favorites

if you like What's in the New York Evening Journal try:

if you like What's in the New York Evening Journal try: