Selections from the Poems and Plays of Robert Browning

Robert Browning, the poet, was the third of that name. The first Robert Browning, a man of energy and ability, held an important post in the Bank of England. His wife, Margaret Tittle, was a Creole from the West Indies, and at the time of her marriage her property was still in the estates owned by her father near St. Kitts. When their son, the second Robert, was seven years of age, his mother died, and his father afterwards married again. The second wife's ascendency over her husband was unfortunately exerted against the best interests of the son. His desire to become an artist, his wish for a university training, were disregarded, and he was sent instead to St. Kitts, where he was given employment on his mother's sugar plantations. The breach between Robert and his father became absolute when the boy defied local prejudice by teaching a negro to read, and when, because of what his father considered a sentimental objection to slavery, he finally refused to remain in the West Indies. The young man returned to England and at twenty-two started on an independent career as a clerk in the Bank of England. In 1811 he married Sarah Anne Wiedemann. They settled in Camberwell, London, where Robert, the poet, was born, May 7, 1812, and his sister Sarianna in 1814. --This text refers to the Kindle Edition edition.
Show more
add to favoritesadd In favorites

if you like Selections from the Poems and Plays of Robert Browning try: 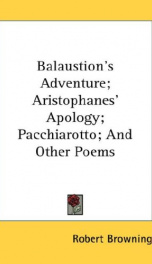 balaustions adventure including a transcript from euripides 5/5 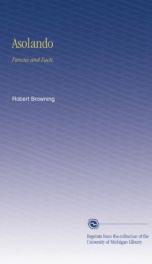 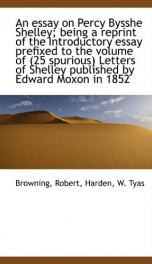 an essay on percy bysshe shelley 4/5 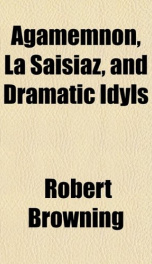 Selections from the Poems and Plays of Robert Browning 3.5/5

The Pied Piper of Hamelin 4/5 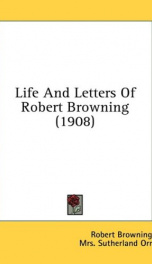 Life and Letters of Robert Browning 4.5/5 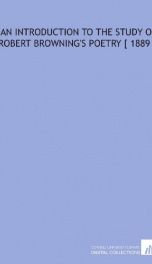 An Introduction to the Study of Robert Browning's Poetry 4.5/5

if you like Selections from the Poems and Plays of Robert Browning try: