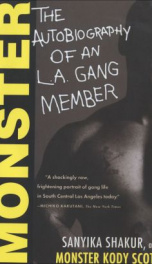 Written in solitary confinement, Kody Scott’s memoir of sixteen years as a gangbanger in Los Angeles was a searing best-seller and became a classic, published in ten languages, with more than 300,000 copies in print in the United States alone. After pumping eight blasts from a sawed-off shotgun at a group of rival gang members, twelve-year-old Kody Scott was initiated into the L.A. gang the Crips.
Show more
add to favoritesadd In favorites