Lessons of the War 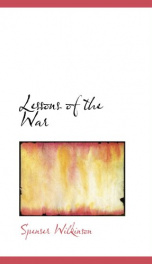 (Henry) Spenser Wilkinson (1853-1937) was an English journalist and writer known primarily for his work on military subjects. From 1882 he was on the staff of the Manchester Guardian, for which he wrote occasional pieces on military subjects. He was let go in 1892 because of C. P. Scott's view that Wilkinson did not follow the principles of the Liberal Party. Through his friendship with Lord Roberts, Wilkinson obtained a post on the staff of the London Morning Post from 1895 to 1914. He became a key figure in the founding of the Navy League of Great Britain and a serious student of the German military philosopher Carl von Clausewitz. Wilkinson's views on military affairs were widely influential. He was elected the first Chichele Professor of Military History in the University of Oxford and Fellow of All Souls College in 1909. He remained an influential voice in Britain until his death. His works include: The Brain of an Army (1890), Imperial Defense (1892), The Command of the Sea (1894), The Nation's Awakening (1896), War and Policy (1900), Lessons of the War (1900) and Britain at Bay (1909).
Show more
add to favoritesadd In favorites

Lessons of the War Being Comments from Week to Week to the Relief of Ladysmith 2.5/5 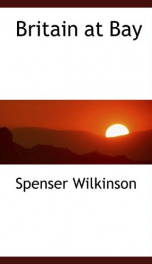 Lessons of the War Being Comments from Week to Week to the Relief of Ladysmith 2.5/5