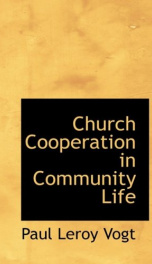 "It has been the task and privilege of the writer for the past four years to be almost constantly in the field traveling from the Atlantic to the Pacific and from Canadian border to the limits of Florida and getting so far as possible first-hand impressions of rural church and community conditions. It is the purpose of the present essay to discuss some of the general problems in rural life presenting themselves to the religious forces of America, and to note some conclusions as to the next steps to be taken if these forces are to render the service in rural advance that it is believed is theirs to render. Suggestions as to local programs will be made only as evidence that when the church undertakes in an adequate manner the solution of problems whose solution is demanded of it, it receives both the moral and the financial support of the people served. The chapters on phases of the local program are intended only to help in preparing the way for the larger service contemplated. " --This text refers to an alternate Paperback edition.
Show more
add to favoritesadd In favorites

if you like Church Cooperation in Community Life try:

if you like Church Cooperation in Community Life try: