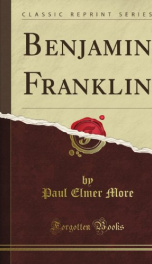 BENJAMIN FRANKLINIEARLY DAYS IN BOSTONWhen the report of Franklin's death reached Paris, he received, among other marks of respect, this significant honor by-one of the revolutionary clubs : in the cafe where the members met, his bust was crowned with oak-leaves, and on the pedestal below was engraved the single word vxr. This simple encomium, calling to mind Napoleon's This is a man after meeting Goethe, sums up better than a volume of eulogy what Franklin was in his own day and what his life may still signify to us. He acted at one time as a commander of troops, yet cannot be .called a soldier; he was a great statesman, yet not among the greatest; he made famous discoveries in science, yet was scarcelyTable of Contents CHAP PAGE; I Early Days in Boston 1 II Beginnings in Philadelphia and First; Voyage to England 22; III Religious Beldsfs - The Junto 37; IV The Scientist and Public Citizen in Phil-; adelphia 52; V First and Second Missions to England 85; VI Member of Congress - Envoy to France 109About the Publisher Forgotten Books is a publisher of historical writings, such as: Philosophy, Classics, Science, Religion, History, Folklore and Mythology.Forgotten Books' Classic Reprint Series utilizes the latest technology to regenerate facsimiles of historically important writings. Careful attention has been made to accurately preserve the original format of each page whilst digitally enhancing the difficult to read text. Read books online for free at www.forgottenbooks.org
Show more
add to favoritesadd In favorites

the religion of plato 5/5 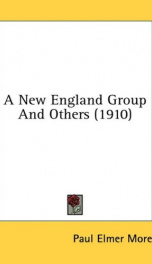 a new england group and others 4/5

the religion of plato 5/5