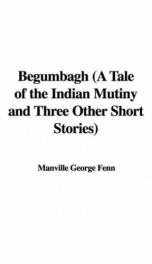 This book of short stories is an excellent read in the usual Fenn styleof suspense. "How does he get out of this one?" is always in thereader's mind.Most of the book is taken up with a story about the plight of theBritish members of a small garrison, during the Indian Mutiny.The second story is about half as long, and is a well-written andextremely plausible story about a house owned by an old gentleman ofancient lineage, where there is a collection of gold plate which wassaid to be an "incubus", that is, the subject of a curse. As indeedthere turns out to be.The third story is about a couple of smugglers who get trapped in a"gowt", which is the exit to the sea of one of the great land-drains ofEastern England, constructed by that great Dutch engineer, Vandermuyden, in the seventeenth century.And the last story is about a new and well-found ship, that nearlydoesn't weather a severe storm in the Atlantic. The captain has takento the bottle, and command is taken by a junior officer: the shipsurvives.
Show more
add to favoritesadd In favorites

The Story of Antony Grace 5/5

Thereby Hangs a TaleVolume One 5/5