A Short History of the Book of Common Prayer 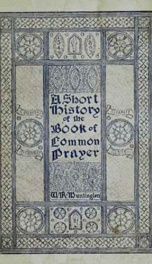 an excerpt from the first chapter: I. ORIGINS. Liturgical worship, understood in the largest sense the phrase can bear, means divine service rendered in accordance with an established form. Of late years there has been an attempt made among purists to confine the word "liturgy" to the office entitled in the Prayer Book, The Order for the Administration of the Lord's Supper or Holy Communion. This restricted and specialized interpretation of a familiar word may serve the purposes of technical scholarship, for undoubtedly there is much to be said in favor of the narrowed signification as we shall see; but unless English literature can be rewritten, plain people who draw their vocabulary from standard authors will go on calling service-books "liturgies" regardless of the fact that they contain many things other than that one office which is entitled to be named by eminence the Liturgy. "This Convention," write the fathers of the American Episcopal Church in the Ratification printed on the fourth page of the Prayer Book, "having in their present session set forth a Book of Common Prayer and other rites and ceremonies of the Church, do hereby establish the said book; and they declare it to be the Liturgy of this Church." For the origin of liturgy thus broadly defined we have to go a long way back; beyond the Prayer Book, beyond the Mass-book, beyond the ancient Sacramentaries, yes, beyond the synagogue worship, beyond the temple worship, beyond the tabernacle worship; in fact I am disposed to think that, logically, we should be unable to stop short until we had reached the very heart of man itself, that dimly discerned groundwork we call human nature, and had discovered there those two instincts, the one of worship and the other of gregariousness, from whence all forms of common prayer have sprung. Where three or two assemble for the purposes of supplication, some form must necessarily be accepted if they are to pray in unison. When the disciples came to Jesus begging him that he would teach them how to pray, he gave them, not twelve several forms, though doubtless James's special needs differed from John's and Simon's from Jude's--he gave them, not twelve, but one. "When ye pray," was his answer, "say Our Father." That was the beginning of Christian Common Prayer. Because we are men we worship, because we are fellow-men our worship must have form.
Show more
add to favoritesadd In favorites

if you like A Short History of the Book of Common Prayer try:

A Short History of the Book of Common Prayer 3.5/5

if you like A Short History of the Book of Common Prayer try:

A Short History of the Book of Common Prayer 3.5/5